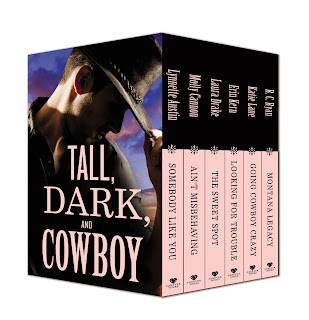 Everybody loves cowboys! Now in this special six-book box set, meet the best of the tall, dark, and handsome cowboys and get ready for the ride of your life . . .

SOMEBODY LIKE YOU by Lynnette Austin: Cash thought he had plenty of time to find the right woman-until he learns that he must marry soon or lose his family's Texas farm. When Boston beauty Annelise enters his life, Cash wonders if she's what he's been looking for all along.

AIN'T MISBEHAVING by Molly Cannon: After her ex-husband leaves her for another woman, Marla Jean won't settle for another lonely night. And her childhood crush, Jake, may just be the right man to help make this good girl go a little bad.

THE SWEET SPOT by Laura Drake: Charla Rae thought she was over her ex-husband-they'd both been through too much together. But when the championship bull rider comes back into town and offers to help with her ranch, will he also convince her to give their love a second chance?

LOOKING FOR TROUBLE by Erin Kern: Fleeing her rich, overbearing family, Avery makes her way to Trouble, Wyoming. She soon tries things the old Avery wouldn't dare, like having a sizzling affair with her sexy new boss, Noah-and discovering he's just the kind of trouble she needs.

GOING COWBOY CRAZY by Katie Lane: When Faith is mistaken for her identical twin sister in Bramble, Texas, there's bound to be trouble-especially with her sister's ex-boyfriend Slate.

MONTANA LEGACY by R. C. Ryan: When Amy left Jesse, she broke his heart. Now she's back in town and stirs his old desires, even as she promises to help him find his family's gold. But under the prairie skies an unseen enemy is closing in to threaten their love-and their lives.

Which of your characters has been the most fun to write so far?
R.C. RYAN- I really can't choose a favorite.  I love them all.  But Jesse and Amy are special.
ERIN KERN- I love all of my characters. Picking just one is like picking a favorite kid. But I’d have to say I loved writing Courtney Devlin (the McDermott brother’s younger sister, and heroine of The Trouble with Trouble). She’s spunky, fiery and tells it like it is. She’s not afraid of backing down from anyone and has a great sense of humor. I always had a great laugh writing her character throughout the books.
KATIE LANE- Kenny Gene. Think Barney Fife in The Andy Griffith Show. Kenny’s not dealing with a full deck, but he has a heart of solid gold and always looks at life like it’s a big package just waiting to be opened.  I just love that about him.
LAURA DRAKE- Probably Katya and Cam, the Heroine and Hero of the last book in my Sweet on a Cowboy series, Sweet on You, due out in August. A Gypsy Army Medic turned PBR Physical Therapist and a beat-up bull rider in his last season on the circuit. Lots of conflict there!
MOLLY CANNON- Hoot and Dooley-the two retired men who sit in the front of Marla Jean’s barber shop, playing Parcheesi and gossiping all day. They’ve managed to get into all 3 books so far.
LYNETTE AUSTIN- Oh, this is hard to answer. I always fall madly in love with my heroes—Cash, Brawley, and Ty are magnificent men and not just because they’re gorgeous. It’s their big, generous hearts that make them unforgettable. I love Annelise Montjoy for the courage she showed in traveling across country to save her grandfather’s life. Sophie London, with her fondness for fairies and her belief in love, really hit home with me. But it might be red-headed, hot-tempered Maggie Sullivan that was most fun to write. She put everything she felt right out there, so I never had to hold back with the emotion.

What is the funniest note you’ve received from your editor?
R.C. RYAN- "Whew.  Hot."  I love reading that in the margin.
Despite hot love scenes, scary shoot-outs with bad guys, what really got my editor all charged up were the food scenes.  She claims to love the meals I serve my cowboys and their ranch families, and put a note in a margin that just reading the scene had her salivating.
ERIN KERN- It’s hard to say, because I’ve received a lot of notes! And after a while they all kind of run together. I’d say my biggest “doh’s” are the typos that even my five year old wouldn’t have made.
KATIE LANE- It’s not a note as much as pictures. My editor owns a cat named Clara, and every Halloween, I get a picture of Clara in costume. The cute photos always brighten my day and make my granddaughters giggle.
LAURA DRAKE- n/a
MOLLY CANNON- She asked if I was willing to change my cat into a dog. I was reluctant at first because I loved my kitty cat, but finally agreed when I found a picture of the puppy that became Sadie.
LYNETTE AUSTIN- Lauren Plude, my fantastic editor, chewed out Ty Rawlins in Nearest Thing to Heaven. Lauren is a vegan, and every once in a while I stick something in, just to make sure she’s paying attention. And she always is. J Poor Ty got in trouble for it. Riding to his favorite fishing hole, he asked Sophie, “You don’t have a problem with fishing on some philosophical level, do you? I mean, you’re not a vegan or anything. I watched you devour too much Texas beef at the wedding to believe that.”  Lauren’s comment?  Hey no ragging on vegans, Ty! ;)

What would readers be surprised to find out about you?
R.C. RYAN- I've been singing since I was a kid, and thought about a career as a singer. I chose instead to marry young and raise five great children. And then tried my hand at my great, driving passion - writing.
ERIN KERN- Probably that I used to be a dancer. I danced ballet for about twelve years and actually performed with the Oakland Ballet two years in a row.
KATIE LANE- I married my high school sweetheart and he inspires all my heroes. (Even when he forgets to take the Chapstick out of his pant pockets and the entire load of laundry ends up with grease spots.)
LAURA DRAKE- I’m a thrill seeker. I love roller coasters, riding motorcycles and I’ve even skydived – until my last jump when chute didn’t open, and I had to throw the reserve. If I were younger, I’d try getting on a bull!
MOLLY CANNON- I’m really good at trashcan basketball.
LYNETTE AUSTIN- I have, at present, sixty-two pairs of flip-flops, and one of those pairs traveled to Morocco with me where I rode a camel. I can’t resist a great pair of flip-flops.

About the Authors
You can learn about Lynnette Austin at:
www.lynnettehallberg.com

Giveaway
a Rafflecopter giveaway
Posted by Jessica (Peace Love Books) at 8:36 AM