Book Review + Giveaway: What a Woman Needs by Judi Fennell 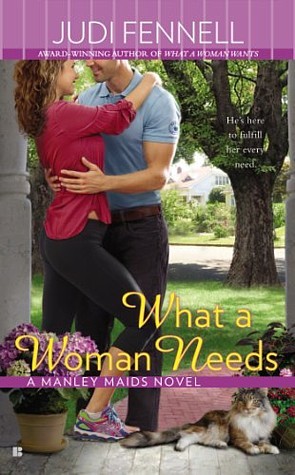 Summary: What happens when three irresistibly sexy brothers lose a poker bet to their enterprising sister? They get hired out for her housecleaning venture. Now, the Manley Maids are at your service. Satisfaction guaranteed. It’s what a woman needs...
Big shot movie star Bryan Manley is destined for fame and fortune, not a repeat of his penny-pinching "normal" childhood. But a bet is a bet, so he agrees to play maid for Beth Hamilton—as long as he can use his servitude as research for his next role, and then resume his life in the spotlight. After her husband’s death and the publicity surrounding it, all Beth needs is a quiet, normal life for herself and her children. She never expected a new Prince Charming to show up at her door, let alone as the new maid. But when the paparazzi follow, Beth is sure of one thing: Bryan has to go. Then flirtation turns into seduction, and Bryan needs to convince Beth he’s more man than maid—or an actor playing a maid. Because this latest gig as the love of Beth Hamilton’s life just might be the role of a lifetime…


Review: Who ever thought hiring a maid would mean a hunky movie star would come to your house to clean? I thought that the first book in Judi Fennell's series was fun, so I couldn't wait to see how the next Manley brother would handle working as a maid, especially in a house of five kids, a hyper dog, and one determined mother.
Bryan Manley is a huge movie star who's used the reporters and attention. What he's not used to, though, is cleaning up after a family of five kids and their widowed mother. But when he loses a card game to his sister, Bryan finds himself in Beth's life, ready to clean up her house. What Beth doesn't expect when her friends hire a maid service for her, is for a movie star to clean up after her kids. After her husband died two years ago, Beth has barely been able to breath as she works her full time job and keeps up with her five kids. Having Bryan around has felt great and her kids absolutely love him, but Bryan isn't looking to settle down and Beth knows that starting anything with him can only lead to disaster. But Bryan just seems to fit and he doesn't know if he can really leave, or if he even wants to, when the four weeks are up.Talk about heartwarming and heart-wrenching all in one novel. When we first meet Beth, you can't help but feel for her as she tries to keep up with her five kids after losing her husband. Not only did she have to deal with losing her husband, but also the nosey reporters who all thought her husband was at fault for when his plane crashed, when in reality he was far from to blame. Before his name was cleared, though, the damage was done and her entire family was trying to cope with the unwanted attention and hurt from losing such an integral part of theirs lives. Each of Beth's kids had a special place in this story and all needed someone there to fill the hole that was left from losing their father. While Bryan is used to the adoring fans, he's not used to adoring children who just love him for him. He was so good with all of Beth's kids, especially Maggie, and it was adorable following him interact and connect with Beth's family. In the beginning, I didn't really buy Beth and Bryan's instant attraction to each other because it seemed so instant and strong, despite the fact that all they had done was talk to each other for 5, maybe 10 minutes. But when they actually started to get to know each other and Bryan spent time with her kids, their relationship made more sense and their connection had an honest, solid foundation. Despite being portrayed as a playboy, Bryan was really sweet and exactly what Beth needed to relax and try to enjoy her life again. While I wasn't that into Bryan and Beth's chemistry in the beginning, Bryan grew on me throughout the novel and Beth's kids drew me in and wouldn't let go. The romance was sweet and the entire family was a part of the charm of yet another fun Manley Maids novel.

Giveaway
One lucky reader will win a copy of What a Woman Needs by Judi Fennell! Just fill out the rafflecopter below! ***US Only*** Ends 6/17