Book Review + Giveaway: To Scotland With Love by Patience Griffin

To Scotland With Love
By Patience Griffin
Release Date: June 3, 2014
From: Publisher 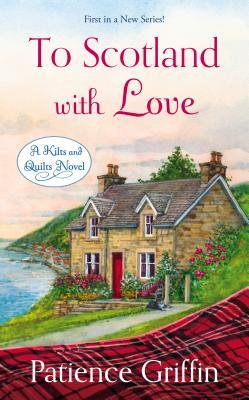 Summary: Welcome to the charming Scottish seaside town of Gandiegow—where two people have returned home for different reasons, but to find the same thing.…
Caitriona Macleod gave up her career as an investigative reporter for the role of perfect wife. But after her husband is found dead in his mistress’s bed, a devastated Cait leaves Chicago for the birthplace she hasn’t seen since she was a child. She’s hoping to heal and to reconnect with her gran. The last thing she expects to find in Gandiegow is the Sexiest Man Alive! She just may have stumbled on the ticket to reigniting her career—if her heart doesn’t get in the way.Graham Buchanan is a movie star with many secrets. A Gandiegow native, he frequently hides out in his hometown between films. He also has a son he’ll do anything to protect. But Cait Macleod is too damn appealing—even if she is a journalist.Quilting with her gran and the other women of the village brings Cait a peace she hasn’t known in years. But if she turns in the story about Graham, Gandiegow will never forgive her for betraying one of its own. Should she suffer the consequences to resurrect her career? Or listen to her battered and bruised heart and give love another chance?

Review: Looking at this cover, I thought I was picking up a historical romance from Scotland. Much to my surprise, and delight, To Scotland With Love is actually a contemporary romance that follows the story of Cait as she leaves America to go back to her hometown in Scotland, only to find something, or someone, she wasn't quite expecting…
When Cait's husband dies in his mistress's bed, she is more than ready to leave that life behind and find the only family she has left back in Scotland. When she arrives, though, she runs into none other than Graham Buchanan, the dazzling actor who disappears from the limelight every now and then to spend private time with his son and grandson. As a journalist who needs to get her career back on track, Cait knows she can rebuild her reputation as a journalist by exposing Graham's secret life. But as she spends more time with him, his family, and his town, Graham becomes much more real than the subject of her latest article.
I knew I had to pick up this novel as soon as I saw that it was part of the Kilts and Quilts series. I'm definitely a crafty person and my mom is a quilter, so I thought it was fun that the main character, and those around her, were into quilting. Cait's grandmother was part of a quilting group and quilting proved to be a bonding experience for not only Cait and her grandmother, but for the rest of the town as well. My favorite part, though, was definitely the "kilts" part of the series. Scotland is one of my favorite countries to read about and I definitely loved the Scotsmen that I found in this novel!
While the whole journalist trying to write an exposing story about someone they start to fall for is a bit cliche, I think that Patience Griffin did really well in putting her own unique spin on it. I absolutely loved Graham's character and his entire family. Mattie is the cutest little boy ever and the fact that he has such a damaged past to the point where he doesn't even talk anymore makes me love him even more. Graham's relationship with Mattie and Mattie's father/Graham's son Duncan was definitely not perfect and Cait was just what he needed to try and pull his family back together again. There was a lot of emotion and struggles in this novel, which made it much more real and heart wrenching for the me. Starting off the novel, I expected it to continue on in a fluffy romance, but the second half of the novel was very serious and pulled on the heartstrings. While things slowed down before the emotions set in, the story definitely picked up and Cait had some serious decisions to make as she fell harder for Graham and his dysfunctional, yet incredibly loving family.
In this sweet novel, you get everything: Romance, drama, secrets, and sexy Scottish men all in a tiny Scottish town. I loved the atmosphere of the town, especially the ladies in the quilt group who form one large, loving family. Cait's grandmother is definitely a stubborn one, but she makes Cait's journey to rebuilding her life that much more meaningful. For a sweet contemporary romance that gives you serious emotions and some Scottish charm, you have to check out To Scotland With Love.

Giveaway
One lucky reader will win a copy of To Scotland With Love by Patience Griffin! Just fill out the rafflecopter below! ***US Only*** Ends 6/12

a Rafflecopter giveaway
Posted by Jessica (Peace Love Books) at 7:43 AM