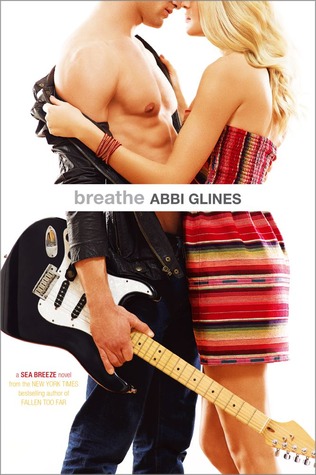 Sadie White’s summer job is at the beach, but she won’t be working as a lifeguard. Since her mom is pregnant and refuses to work, Sadie will be taking over as a domestic servant for a wealthy family on a nearby island.When the family arrives at their summer getaway, Sadie is surprised to learn that the owner of the house is Jax Stone, one of the hottest teen rockers in the world. If Sadie were normal—if she hadn’t spent her life raising her mother and taking care of the house—maybe she’d be excited about working for a rock star. But she’s not.Even though Sadie isn’t impressed by Jax’s fame, he is drawn to her. Everything about Sadie fascinates Jax, but he fights his attraction: Relationships never work in his world, and as badly as he wants Sadie, he believes she deserves more. Yet as the summer stretches on, Jax’s passion leaves him breathless—and Sadie feels like the only source of oxygen.Can their love overcome the disparity in their lifestyles? One breath at a time, they’re going to find out…

Going into this one, I was so excited to pick it up. I mean, it's Abbi Glines! I loved The Vincent Boys and have heard such good things about her Sea Breeze series, so I bought the first five books of the series. Unfortunately, Breathe severely disappointed me with it's cheesy storyline and naive heroine who I just couldn't connect with. The day after the last day of school, Sadie White finds herself going to work for her pregnant and irresponsible mother. Sadie is used to being the adult in the family and does what she can to support her mother. Little does she know she's going to work for teenage rockstar and heartthrob Jax Stone. Sadie isn't impressed with Jax's rockstar status, but Jax is taken by Sadie from the moment he lays eyes on her and will do anything to show her he can't live without her. Ugh. Anytime I think about this book now that I've read it, I cringe thinking about the cheese-factor. Seriously, this is so unrealistic and I was reading bits and pieces out loud to my friends to show them how unrealistic the dialogue and thoughts were. No one talks like the girl they are dating is the only reason they breathe. Speaking of that, can you say insta-love? Jax just suddenly decided that Sadie was the only one for him and there wasn't any build up to their attraction whatsoever. Along with the insta-love and cheesiness, I also was not a fan of Sadie's character. She was very naive and "innocent" which, of course, Jax just LOVED. Ugh, I am okay with an innocent character, but not when that aspect of their character is brought up over and over and over again. She acted so helpless, especially when it came to her mom and taking on her mom's responsibilities, and I was so over it.Overall, this was a huge disappointment and I am so sad that this was the way it was. I have heard, though, that the series gets better with each book and, seeing as I own the next four books, I will continue on with this series. Fingers crossed that book two is much better than book one!

Posted by Jessica (Peace Love Books) at 9:27 AM