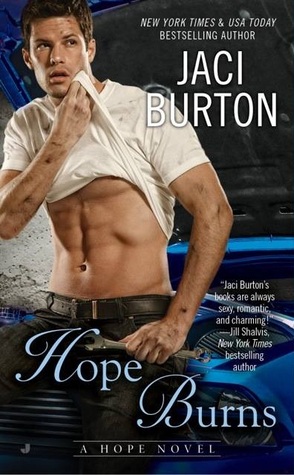 Summary: Molly Burnett dreads returning to her hometown of Hope for her sister’s wedding, especially knowing she’ll have to endure a weekend with the one man she never wants to see again. It’s only a couple of days, so Molly will try to forget her painful past with high school sweetheart Carter Richards. Because despite the bitter memories, she still can’t forget what they once meant to each other.
But when Molly is forced to extend her stay, Carter sees this as his second chance to do things right, to start over again with the only woman he’s ever loved. This time, he isn’t going to let Molly run. Together they’re going to confront the past and put it behind them, and hope for a future as bright as the flame that still burns hot between them.


Review: Jaci Burton is one of my favorite contemporary romance authors and I fell in love with the first two novels in her Hope series. When I was reading Molly's story in Hope Burns, though, I found myself not really caring for her relationship with Carter as much as I wanted to.
Molly Burnett never stays in one place for very long; ever since she went through a horrible breakup with her high school sweetheart, she took off and never looked back. So when she has to go back home for her sister's wedding, Molly plans to be in and out with no run-ins with her ex. Carter Richards is ready to show Molly that he's not the same guy he was in high school, especially when Molly is forced to elongate her stay in Hope. Molly isn't going to let Carter back in that easily, though, and Carter has to fight to keep her in Hope just a little bit longer to finally make her see that there's never been anyone else but her…From the beginning of the novel, we know that something very emotional happened between Molly and Carter in their past, but we aren't told what it is right away. I wish we had more from their past so that we could understand how in love they used to be and how emotionally damaging their relationship was for them both. Molly constantly talked about how hurt she was by it and how hard it was to trust Carter again, but I had a hard time believing that because the background just wasn't established enough. When it was finally revealed what had really happened back in high school, I felt like we didn't get enough from Carter to understand his emotions that Molly never acknowledged. I wish we got more from Carter than just what he says at the end of the novel so that I could feel more connected to him and understand why he wanted to be with Molly so badly. Aside from the characters not really connecting as much as I wanted them to, I still loved the small town life we got from this novel. The story opens with Molly having to go back to hope for Emma and Luke's wedding, whose story we got in the first novel. Des and Logan, the couple from the second novel, show up a bit too and I loved seeing them all so adorable and in love. There were great friendships and relationships among the people in the town and also between Molly and the rest of her family. The small town life really made this novel and I loved how interwoven all of the characters were with each other. Overall, I wasn't swooning over Molly and Carter's relationship and Molly's phobia of commitment got a bit old by the end of the novel. However, I still loved how sweet their relationship was and how involved so many other characters were in their lives. While not my favorite of the series, I still recommend trying out the Hope series for some small town characters with big hearts full of lots of love.