Book Review: When a Laird Takes a Lady

When a Laird Takes a Lady (Claimed by a Highlander #2)
By Rowan Keats
Release Date: May 6, 2014
Source: Publisher
Goodreads | Amazon | Book Depository 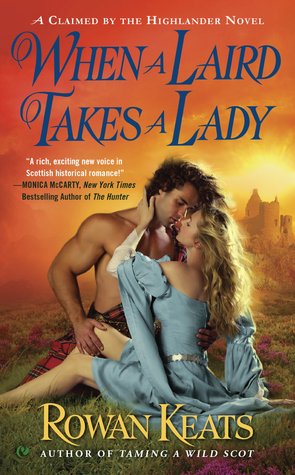 Summary: In the Highlands of Scotland, honor and loyalty are worth more than life itself. But when a haunted woman meets a wronged warrior, love will prove more powerful than anything they have ever known.
Isabail Grant has had to be strong all her life. Over the years, she has lost everyone close to her, and now she’s seeking justice for her brother’s murder. But en route to Edinburgh to petition the king, she is kidnapped by a fierce warrior—and is shocked to find herself irresistibly drawn to her captor.Aiden MacCurran is an outlaw. The laird of a small clan, he’s been falsely accused of killing the king’s courier and stealing the Crown’s property—and the key to clearing his name and redeeming his clan lies in Isabail’s memories. But Aiden and Isabail must first weather deceit and treachery before they can find the truth and claim the love that’s growing between them.

Review: Recently, I've become obsessed with the show Outlander and all I want to do is read books about highlanders. There's just something about a strong man in a kilt that just gets to me…so I knew it was about time I picked up my copy of this book from my shelf.
Isabail Grant has lost those closest to her throughout the past couple of years and she'll to anything to seek justice over her brother's murder. On her way to Edinburgh to petition the king, though, she's kidnapped by a fierce highlander who is wanted for her brother's murder. Aiden MacCurren has been marked an outlaw after being framed for the murder of the king's courier and he'll stop at nothing to clear his name, which means capturing the only person who may know the identity of the man who actually committed the murder. Isabail isn't as willing to trust the man who she's learned to hate, but she can't deny the slow-burning attraction she has for the big and strong, yet surprisingly gentle man. Aiden and Isabail have to work together to find the truth over who really committed the murders, which leads to an attraction that's becoming harder and harder to resist. I love romances where the main couple are enemies that end up getting to know each other and fall for the person they discover beneath the rumors and lies. Aiden is so scary and intimidating in the beginning that Isabail is physically terrified of him before she gets to know him. I loved how she had to uncover who he really was and see his gentler side before she finally realizes that she's attracted to the dominating warrior. I think their romance did come a bit out of no where in regards to how Aiden acted around Isabail, but I still enjoyed how they both tried to fight their attraction since they were supposed to be enemies. Isabail sure was a feisty one when she was Aiden's prisoner and I loved how she wouldn't let him boss her around when she was living with his clan. Isiabail was very headstrong and was determined to either get answers or attempt to escape so that she could return to where she really belongs. She soon learned, though, that home may not be where she really belonged after all...While the romances is always my favorite part of novels, I loved the mystery behind who really committed the murder that Aiden was accused of. There were so many secrets revolving around who Isabail could trust and what Aiden was hiding within his clan. There were a lot of action-filled moments where you didn't know who would live and who wouldn't. Oh, and there's an adorable dog that becomes attached to Aiden and it is the cutest thing ever. The other characters were great, too, and I especially liked Ana and how she had to work to earn the trust of others just like Aiden had to do with Isabail. No relationships are easy in this book and they really have to try hard in order to make them work. Overall, When a Laird Takes a Lady is an engaging highland romance that has plenty of action and an attraction that is impossible to deny. Isabail and Aiden have a very complicated relationship and the secrets and scandal that revolve around both of their lives make it difficult for either of them to trust one another, despite their intense attraction for one another. If you want a romance full of outlawed highlanders and a bitter hatred that turns into a passionate romance, you should check out When a Laird Takes a Lady.