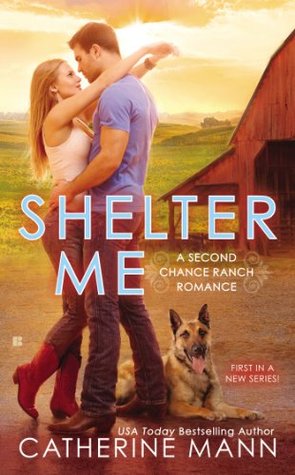 Summary: Nestled in the sunny fields of Tennessee lies the McDaniel family’s Second Chance Ranch Animal Rescue. Two new arrivals are on their way, but only one is the four-legged kind.
Staff Sergeant Mike Kowalski wants only one thing after he gets home from Iraq: to sleep in a king-sized bed with clean sheets. But first, he has to hand off his fallen commander’s dog, Trooper, to his family without handing off his heart to Sierra…Sierra McDaniel needs a break. Her family life is crazy, and when she’s not mucking out kennels, she’s slogging through grad school. Sierra certainly doesn’t want another dog, especially one that reminds her of her father. And she definitely doesn’t want to see Mike with that charming smile of his…But Trooper has a mission of his own. Before too long Mike is moving to the ranch to lend a hand—and hoping for his own second chance with Sierra.


Review: First off, let me start out by saying that I'm a sucker for a good romance that involves animals. Seeing as Shelter Me takes place at Second Chance Ranch, an animal rescue the main character's mom runs out of their home, I knew I just had to read it.
After learning her father passed away while serving overseas for yet another tour, Sierra McDaniel and her family are devastated. Hanging by a thread, her mother is trying to save their animal rescue while her little brother recedes further and further away from them and her grandfather's Alzheimer's grows worse with each passing day. When Staff Sergeant Mike Kowalski returns home with the dog her father took in while overseas, the last thing Sierra expects is for him to hang around. Sierra and Mike have a past that they're both not quite over, but Sierra doesn't know if she can have a future that turns out like her mother's, living a lonely life in fear of losing her husband every day that he's gone. When Mike moves in and helps out around the ranch, though, Sierra finds it harder and harder to fight her feelings, especially when a pesky dog decides it's his job to make the family happy once again...Like I said, animals just tug at my heart strings. I loved how Trooper was a character in himself and even had some passages from his point of view. Instead of being juvenile and cliche as some animal perspectives passages are, Trooper's perspective added so much more love and substance to the novel. I adored his character and how loyal and smart he was with Mike and Sierra and her whole family. I also loved how passionate Sierra and her mom were about saving animals. There were moments when they felt so helpless with all of the animals that needed their help that they had to deny because they couldn't take on too much at once. Those moments just tugged at my heartstrings and I could connect with their love for animals and desire to help the adorable creatures. Okay, enough gushing about the animals and onto the romance. While I really liked Mike and Sierra's relationship, I wish we had more information about their past. All we knew was that they were together for about 3 months, which were described as some pretty hot and heavy months, before Mike was deployed and that they broke up before he left. He comes back and they have to tiptoe around their feelings for each other and try to deny their intense chemistry, especially with Mike around so much. I got their attraction in the present, but I was completely lost as to what their relationship or breakup was like in the past. I think that took a bit away from their relationship, but I still liked how Sierra had to figure out if she really wanted to have a military family when she grew up witnessing how difficult it was with her parents and brother. I loved how her family was so important and involved in the story because that meant the novel was about so much more than Sierra's love life. She had real problems at home with her brother's withdrawal from the family, her mom's grief over losing her husband, and her grandfather's increasing illness. Oh, and Sierra is also a grad student. Talk about having your plate full. Sierra has to deal with the real world and I was able to care about her character a lot more and really hope everything turned out for the best. In the end, Shelter Me ended up being an adorable animal rescue story with a sweet, emotional romance and fleshed out characters that became like real people to me. By the end, I was so touched with how sweet all of the characters were and how much of an impact Sierra and her mom had on their community. If you want a story with some raw emotions, adorable animals, and an uncertain romance, you should definitely pick up a copy of Shelter Me by Catherine Mann. It's a romantic treat you don't want to miss!

Posted by Jessica (Peace Love Books) at 8:53 AM