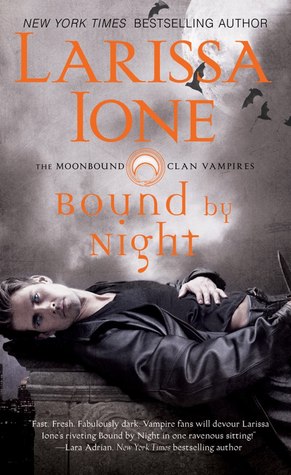 Summary: A WOMAN OUT FOR BLOOD
Nicole Martin was only eight years old when the vampire slaves rose up in rebellion and killed her family. Now she devotes her life to finding a vaccine against vampirism, hoping to wipe out her memories—along with every bloodsucker on the planet. But there’s one thing she cannot destroy: her searing, undeniable attraction for the one man she should hate and fear the most . . .A VAMPIRE OUT FOR REVENGEA member of the renegade vampire MoonBound Clan, Riker is haunted by demons of his own. When he recognizes Nicole and remembers how her family enslaved his loved ones, his heart burns for vengeance. But when he kidnaps Nicole and holds her in a secret lair, his mortal enemy becomes his soul obsession, his greatest temptation, and, perhaps, his only salvation—a hot-blooded lover who could heal him with her touch . . . or bury him forever.


Review: Okay, so I've got to say that after the whole paranormal boom that happened over the past five to eight years, I've become picky about my paranormal novels. So many of the paranormal novels I've read have run into one another because many sound the same and lose their uniqueness. I had the chance to review Bound by Night, though, and the summary promised me a sexy novel about vampires that I just couldn't resist giving it a try.
When she was eight years old, Nicole Martin's family was killed by their vampire servants, leaving her terrified and physically scarred. Twenty years later, Nicole has devoted herself to studying vampires for the benefit of humans. So when she's kidnapped by the vampire who killed her beloved nanny all those years ago, Nicole wants nothing more than to kill him and return to her home. What she doesn't expect, though, is to discover an undeniable attraction to the caring and passionate man beneath the fangs. Ricker yearns for vengeance against the Martin family who enslaved and killed the only woman he's cared for, but when he captures Nicole and takes her back to the clan's secret hideout, he becomes obsessed with the human he's spent the past twenty years hating. Nicole shows that she's not as evil as the vampires thought she was and they have to work together to save the vampires from an even bigger enemy than they had ever thought possible.Oh boy, Larissa Ione definitely did not create your cookie cutter paranormal romance. She created some hot blooded characters with an even hotter attraction for each other. I absolutely loved both Nicole and Riker and how devoted to their own causes they were. Nicole had such a good heart and didn't want anyone to suffer, especially if they were as helpless as she was when she was attacked as a child. So when she is kidnapped by Riker, she's terrified and absolutely hates the man who's taken her. But when she talks to Riker and sees that he's like a normal human, but, you know, drinks blood and everything, her walls start breaking down and she starts allowing herself to feel the immense attraction she has for him when he's around. The chemistry between her and Riker is intense, but Riker isn't quite ready to let anyone in, let alone a human. Ricker can never forget how he let down a woman he really cared for who ended up dying because of Nicole's family. Riker still hasn't forgiven himself or humans, which makes it that much harder to accept his attraction and feelings for Nicole, who is the last person he should want to be with. But who doesn't love a forbidden romance? I know I sure do...One thing is for sure, vampires are hot. I loved how emotionally and physically intense things got between Nicole and Riker. With such a dominant vampire as the male lead, things were bound to get steamy when he and Nicole finally gave into their intense desire for one another. On top of their romantic emotions, though, both Nicole and Riker were very dedicated towards achieving justice for their people. They threw themselves into what they were passionate about and definitely never went down without a fight. With two hardheaded people, they got themselves into some pretty tricky situations, so you were definitely always kept on the edge of your seat. Between the romance and action, I could not put this book down. I am so in love with the paranormal world Larissa Ione has created and how the vampires are fighting for their right to live among the humans. And with that ending, I am beyond excited to read Hunter's story in the next book of the series. More deliciously sexy vampires fighting humans and other vampire clans for the right to live while falling in love on the side? You can't go wrong! Any paranormal fan needs to read the MoonBound Clan Vampire series for a paranormal romance that takes vampires to a whole new level.