Book Review: In His Sights by Jo Davis 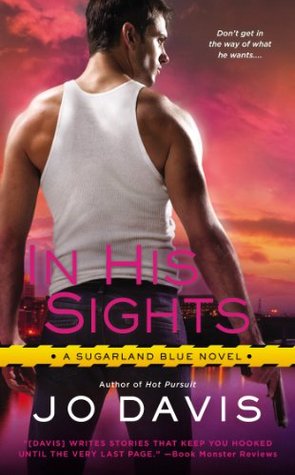 Summary: When a dangerous criminal targets those whom Sugarland detective Chris Ford holds dear, nothing will stop him from hunting down his man.…
Chris is one the best and brightest at the Sugarland PD, but lately a mysterious illness has him struggling to get through the day. When his symptoms land him in the care of brilliant and sexy Dr. Robyn Lassiter, Chris realizes that he is the latest victim in a rash of mysterious poisonings in the area—most of them fatal. Figuring out who’s causing the fatal outbreak has become a very personal—and deadly—race against time.Despite battling her own personal demons and painful past, Dr. Robyn Lassiter can’t fight her attraction to her new patient. But as she struggles to help Chris track down the sick mind behind the deaths, she’s not only at risk of losing her heart but of falling headlong into a lethal plot that could take her life.…

Review: Good thing I was in the mood for a light, breezy romance with a little bit of mystery and murder thrown into the mix, because that's exactly what you get with Jo Davis's newest release. While not the most intense or emotional read, Jo Davis gives us some endearing characters who have to solve a mystery that's turned far deadlier than they had ever imagined.
Chris is normally at the top of his game as a detective for the Sugarland PD, but lately he just can't seem to shake an illness that has left him feeling weak and fatigued. No matter how sick he's feeling, though, Chris isn't letting anything stopping him from doing his job, which involves tracking down the culprit who's been breaking into homes all around town over the past several months. But when Chris meets Dr. Robyn Lassiter, nothing can take his mind off of the beautiful and intelligent woman. With a rocky past of her own and an adorable daughter who's her world, Robyn isn't sure she's ready to let a man back in her life. With Chris, though, she finds it easier and easier to let her guard down and really fall for him. When a mysterious link between recent deathly illnesses pops up at the hospital and claims Chris as its latest victim, Robyn works with Chris to find the culprit before she risks having her heart crushed all over again. Like I said, this was a very light and easy romance. I flew through the pages and thought that Robyn and Chris had very sweet relationship. While I think that their attraction might have happened too quickly in an "oh my gosh, she was the most beautiful creature ever" sort of way, I think they were a perfect fit for each other. I loved how easily Chris fit into Robyn's life and accepted her daughter Maddy. I think Maddy's character was very cute and really made Chris decide if he wanted a real life with Robyn and her daughter instead of the bachelor life he'd been living. Robyn, on the other hand, knows what it's like to have a rocky relationship and have her heart broken, so Chris definitely has to prove he's worthy before she even comes close to letting him into her and her daughter's life. Along with the romance, the mystery behind the illnesses and break-ins going on around town definitely added a level of intrigue and suspense to the novel. Who was behind the break-ins? Why were so many seemingly healthy people dying? Early on, we get a small passage from the viewpoint of the killer, so we know some seriously shady business is going on, we just have no idea who it is or why they're doing it. When Chris's illness gets worse and worse, his relationship with Robyn is put to the test and they're forced to realize how much they really care about each other. I enjoyed how they had to work together with their different backgrounds and both brought something to the table when they were solving the mystery. Robyn is a very intelligent person and was definitely never a damsel in distress in the relationship, which is refreshing in a romance novel with a detective as the male lead, a normally dominating character role. Chris and Robyn balanced each other out and had more than their relationship to deal with in this novel, which only brought them closer together. Overall, I really enjoyed Jo Davis's latest Sugarland Blue novel. It is definitely a lighter read, but I enjoyed the simplicity of the relationship and the added suspense to the story. With a hot detective chasing a murderer while falling for an intelligent woman with an adorable daughter, In His Sights is a fun romantic suspense you won't be able to put down once you start.

Posted by Jessica (Peace Love Books) at 8:58 AM