Book Review: The Highlander Next Door by Janet Chapman 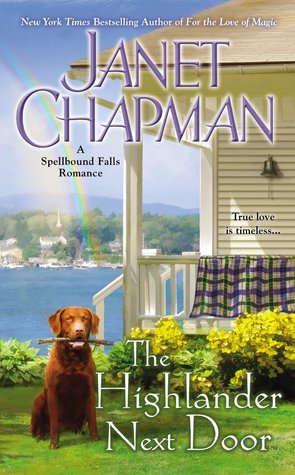 Summary: Legend has it love is carried on the rising mists of Spellbound Falls, and not even time-traveling highlanders are immune to its magic…
Birch Callahan has seen the trouble men can cause. After witnessing her mother’s four marriages, Birch now runs a women’s shelter and doesn’t want a man in her life. But there’s something about her neighbor, Niall MacKeage. Birch can’t figure out how the cop can be so big and gruff and yet so insightful and compassionate—and sexy. Or how she’s falling for a man who acts like someone from the twelfth century.Niall knows that Birch is attracted to him, even if she seems to distrust all men. Yet he also knows she has a secret—something that drives her to place herself in harm’s way for the women of her shelter. Niall would gladly rush to Birch’s side to protect her from harm, but with their secrets standing between them, he’ll have to reveal his own truth if he wants to keep her…


Review: I'm a sucker for a good highlander romance, so I was definitely looking forward to reading this book. I haven't read any other novels by Janet Chapman, but I was excited to see what would happen when you throw a time traveling Scotsman into a tourist town in Maine…
Birch Callahan has seen her fair share of untrustworthy men, especially when it comes to those who go after her mother. Birch decides to open a woman's shelter in Spellbound Falls and is determined to show her residents that they don't need a man to feel strong and beautiful. But for some reason, Birch can't stop noticing the big, sexy cop next door. Niall knows that Birch is one hard-headed lady, but he can see that there's something beneath her hard exterior that's made her the way she is today. So when Birch finds herself in more than one life threatening situation, Niall always makes sure he's the one to save her. When danger comes to Spellbound Falls and threatens Birch and her family, Niall does everything in his power and beyond to save the woman who claims she doesn't need a man to take care of her. Or does she? Right away, I could tell Birch was going to be a very different protagonist from what I'm used to. While I love headstrong women, I think Birch sometimes went over the edge in her trust issues with men. Birch pretty much drags any woman who is having man problems away from their significant others to live at the shelter where they an learn to be independent and strong. While I'm all for independence, it seemed like Birch took it a bit too far sometimes. Also, with Birch being such a strong-willed woman, Niall sometimes lost his macho-ness and seemed a bit too soft and too much of a pushover at times. I wish we got more of the warrior-like Scotsman Niall was supposed to be as opposed to a man that liked to stay out of the way until his help was truly necessary. That being said, though, I still really enjoyed the suspense and mystery this story had to offer. Who really were the men that had gone after Birch's mother's affections? Who was this mysterious new God that seemed to be meddling in everyone's business in Spellbound Falls? Who was trying to kill Birch and why? There was definitely a scandal going on and Birch had to watch her back for people going after the secrets she didn't even know she had. I also enjoyed how Niall was still new to town and building up his reputation as the head of the police department. People aren't too keen to strangers coming into their town and taking on a position of authority, so Niall had to fight to earn his respect and I think he was so cute when he tried solving the conflicts of the town citizens by forcing them to finally confront their issues that they've been skirting around for who knows how many years. Niall's romantic relationship with Birch was definitely unconventional, but I think they worked in their own unique way. Overall, I enjoyed this story more for the secrets and suspense than for the romance. Birch wasn't my favorite character, but I appreciated how headstrong and independent she was. I really loved Niall's character and how endearing his Scottish charm was, and his relationship with Birch seemed to work when she wasn't running all over him. I'm definitely interested in reading Janet Chapman's other novels and seeing what other sexy time-traveling highlanders she has in store for me next.