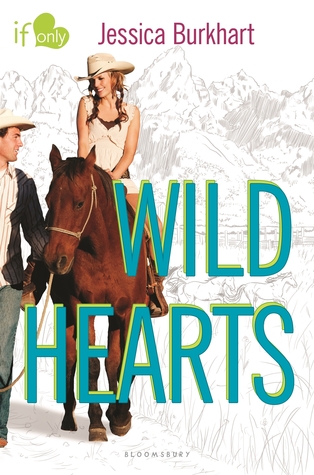 Summary: Brie Carter's father's land development business has taken her family all over the world, but as soon as they arrive at their new home in Lost Spring, Wyoming, the town turns out to protest. They don't want a new hotel if the resident mustang population will be displaced or hurt as part of the deal. Then Brie meets Logan, a gorgeous local who has a special connection to the mustangs, and she is immediately drawn to him . . . and the horses. However, with Logan's father leading the protests and Brie's father refusing to budge, it's clear that their parents are heading towards an all-out war. Can Brie and Logan find a way to save the mustangs and be together? Or is their love doomed from the start?
This new title in the If Only line is the perfect summer read and proves that love flourishes in the wildest places!


Review: When this book showed up for me to review, I was definitely intrigued. I'm a sucker for cheesy YA romances and this one promised a YA romance with some horses thrown into the mix.
Brie Carter has spent her life moving around the world for her dad's job as a developer. She's loved moving and experiencing new cultures, but she's never really formed real connections with friends her own age. From the moment her family shows up in Lost Springs, Wyoming, the locals make it clear that Brie and her family are not welcome. Quickly, Brie finds out that her dad's newest development is threatening the local Mustang population, which the locals aren't happy about. When Brie meets Logan, a local cowboy determined to show her how special the Mustangs are, Brie starts to care about the wild horses as well. But can she help Logan and his town without betraying her own family? I've got to say, I adored the horse aspect of this novel. I love horses and thought it was cool how Logan was a cowboy who had his own farm and everything. It was cute how he tried to show Brie how great Lost Springs really was and how important the Mustangs were to him. I wasn't a huge fan of how perfect Logan seemed to be with his perfect body and how they instantly fell for each other, but, like I said, it was just a fluffy romance. I don't know why, but for some reason I could totally see this as being a Mary Kate and Ashley movie. The main character saw something wrong with the community and teamed up with a cute guy to try and save teh world, or at least their small town. I thought Brie was an okay character who was both likable and annoying at times. I didn't really believe in her friendship with the only girl her age she really meets because Brie pretty much only uses her as a way to sneak around with Logan. Also, the feuding among the adults did not seem mature or as realistic as I thought they should have been. In the end, this was just an okay read for me. I enjoyed the animal aspect and how much Brie started to change because Logan showed her the quirks of Lost Springs and how powerful the horses were to his community. However, the conflicts were a little too exaggerated and the plot a bit too fluffy for my taste.

Posted by Jessica (Peace Love Books) at 7:59 AM