Blog Tour/Review + Giveaway: Tessa Ever After by Brighton Walsh

Tessa Ever After (Caged in Winter #2) 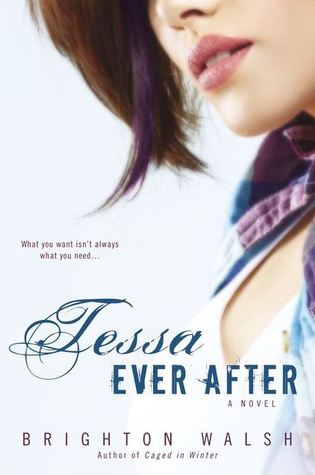 Summary: In this grippingly emotional New Adult novel from the author of Caged in Winter, what you want isn’t always what you need…

Jason’s been living (and loving) the rich playboy lifestyle for five years, but now his parents are pressuring him to get involved in the family business. The last thing he wants is another obligation, but when his best friend moves out of state and asks Jason to look after his sister, he can’t just say no.

Tessa had to grow up way too soon. After dealing with the aftermath of her parents’ deaths, then becoming a teenage mom, she knows the meaning of responsibility. Which is why, at twenty-two, she’s looking for so much more than a party boy. She’s looking for someone who can stand by her and her daughter…forever.

A relationship between them is doomed from the start, but who says they can’t have a little fun? But as Jason gets closer to Tessa—and her daughter—fun starts to turn into something else… Something Jason’s not sure he’s ready for.

Review: I really enjoyed Brighton's first book in her Caged in Winter series, so when I received a copy of Tessa Ever After, I was excited to see what else Brighton had in store for us. I should't have been surprised to find an emotional, romantic, hot story about two people who struggle to let each other in.
Ever since she became pregnant at 17, Tessa has had to grow up fast and become a mother. Now, at 22, Tessa is raising her daughter, working at a salon, and dreaming of Mr. Right. Jason has always had the playboy reputation while his life has been dictated by his wealthy, heartless parents. Lately, though, Jason has found himself spending more and more time at his best friend's little sister's house, checking in on her and her daughter. And the more time he spends with Tessa, the less he sees her as his best friend's little sister. Tessa finds herself feeling things for Jason's she's never felt for anyone before, but is he really ready to settle down? While I really enjoyed Caged in Winter, I didn't fully remember the story going into this one. Tessa Ever After can be read as a standalone, but the characters from Caged in Winter are in this one, so it's better if you're fresh on Caged in Winter. Once you get over how the story sort of jumps into Tessa and Jason already being friends and Jason already sort of feeling things for Tessa, this is such a sweet story. You get to see Jason change from a playboy to a really loving, amazing man who has a soft spot for Tessa and her daughter. It was sad how Tessa always felt like a failure with her daughter, who was absolutely adorable. I loved the family dynamic between Tessa and her daughter and how imperative it was that Tessa find someone worthy of fitting into their lives. The story may have revolved around Tessa and Jason and their intense attraction to one another, but I loved how Cade was such a huge impact on their relationship. Cade was in Caged in Winter and he was a big presence in Tessa's life and affected her decisions in this book, even when he was living in Chicago and only talking to Tessa on Skype. So many other people are involved in this book and I loved how Tessa and Jason had to think of their friends and family while dealing with their own complicated feelings from one another. Overall, I really enjoyed Tessa Ever After. I loved Tessa's character and how the other relationships in the novel were imperative to the main romance. If you want a sweet and sexy romance between a single mother and a notorious bad boy, you have to pick up a copy of Tessa Ever After.

About the Author
Brighton Walsh spent nearly a decade as a professional photographer before deciding to take her storytelling in a different direction and reconnect with writing. She lives in the Midwest with her husband and two children.