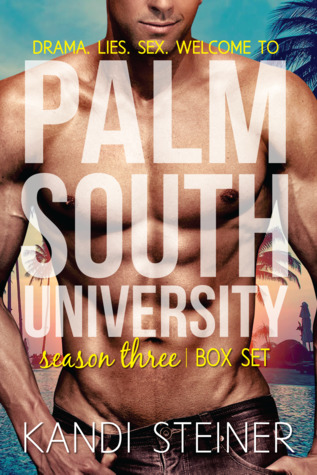 The weather isn’t the only thing heating up in South Florida. At a school where fraternities and sororities don’t exactly play by the rules, relationships are bound to be tested. Parties and sex are definitely key ingredients in the Palm South recipe, but what happens when family issues, secret lives, and unrequited love get tossed in the mix?

Follow Cassie, Bear, Jess, Skyler, Erin, Ashlei, and Adam as they tackle college at a small, private beach town university. Written in television drama form, each episode of this serial will pull you deeper and deeper into the world of PSU.

Where the sun is hot and the clothes are scarce, anything can happen.

FINALLY I WAS ABLE TO READ SEASON THREE! After two whole books with these characters, I am utterly obsessed with them and needed to know what would happen to them during a new year at PSU!Another year is upon Palm South University, which means a new pledge class for Kappa Kappa Beta and people having to confront the situations, relationships, and friendships they left at the end of the spring semester. Relationships are tested and our favorite characters have to figure out their priorities, both with relationships and with their future careers. Oh man. I have so many favorite characters in this series and my heart just hurts for them with what they go through. So many relationships go through trials and it's so hard to read at times as characters make certain decisions. Cassie and Erin are probably my two favorite characters and they're the two who probably deal with the most pain in this book. Okay, so Jess also has a lot to deal with as well. And Bear. So pretty much everyone goes through some crap at some point in this book. But it wouldn't be college without the drama now would it?? I feel like we didn't get as much of Skylar or Bear as I would have liked, but I'm definitely diving into Black Number Four next, which will be sure to quench my thirst for more Skylar. I experienced had some heart-stopping moments in this book, specifically with my absolute favorite couple in this series, and I just wanted to hug them and make them feel better. Just like a Netflix show, these characters have developed and connected over three whole "seasons" and I wanted certain things to happen and felt like all of these characters are my babies. I swear, I could read a whole book about each of these characters and still not have enough of them. Overall, this was another fantastic addition to the PSU series. So much drama, secrecy, and testing of relationships that we've seen grow and develop over the course of three books now. Some side characters have left us while new ones have been added, but we still have out core group of characters who we only wish the best for.