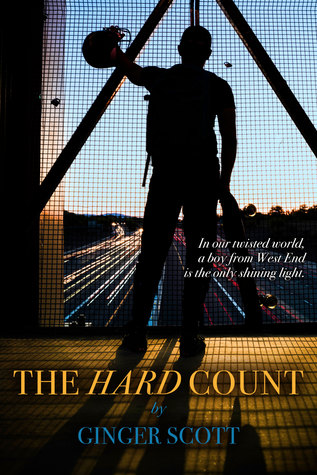 Nico Medina’s world is eleven miles away from mine. During the day, it’s a place where doors are open—where homes are lived in, and neighbors love. But when the sun sets, it becomes a place where young boys are afraid, where eyes watch from idling cars that hide in the shadows and wicked smoke flows from pipes.

West End is the kind of place that people survive. It buries them—one at a time, one way or another. And when Nico was a little boy, his mom always told him to run.

I’m Reagan Prescott—coach’s daughter, sister to the prodigal son, daughter in the perfect family.
Life on top.
Lies.
My world is the ugly one. Private school politics and one of the best high school football programs in the country can break even the toughest souls. Our darkness plays out in whispers and rumors, and money and status trump all. I would know—I’ve watched it kill my family slowly, strangling us for years.

In our twisted world, a boy from West End is the only shining light.
Quarterback.
Hero.
Heart.
Good.
I hated him before I needed him.
I fell for him fast.
I loved him when it was almost too late.

When two ugly worlds collide, even the strongest fall. But my world…it hasn’t met the boy from West End.

GIVE ME ALL THE FOOTBALL. As a HUUGGEEEE Friday Night Lights fan, I was all about this book when I started it. In a world where football is life, I could not wait to get lost in The Hard Count. As the football coach's daughter and the quarterback's twin sister, Reagan Prescott lives and breathes football. So when she has to decide what to make her film on to submit as an application to film school, Reagan knows she has to capture the heartbreaking, unstable world of private school football. Nico Medina may be able to keep up and even out-whit Reagan in the classroom, he's from West End, which is a whole other world than what Reagan is used to. When football brings the two closer, Reagan and Nico have to navigate the judgmental world they live in while watching those they love begin to crumble. Like I said, from the start, I loved how this book revolved all around football. Reagan's making a documentary about the politics of football and how much pressure her dad feels on and off the feel. I absolutely loved how close Reagan and her father were and I appreciated how there was an authentic father/daughter relationship in a book that takes place in high school. I am super close to my dad, so I liked being able to connect with Reagan in that way. I also enjoyed how flawed Reagan's family was and how much they changed throughout the novel. The pressure of living a perfect life can really wear down on a family and it was proven through what Reagan's family went through. While I really loved the romance between Nico and Reagan, it wasn't the center of the story. There was so much more going on with Reagan's family, with Nico's family, with the football team…and I loved it. Don't get me wrong, the romance was still super cute and I appreciated how Reagan wasn't sure what to do about her crush on Nico. Nico's family was adorable and it was nice how Reagan got to get to know life in the West End compared to her more privileged life where she was from. If you're a fan of Friday Night Lights, Simone Elkeles, or Katie McGarry, you're going to LOVE The Hard Count. With football, romance, family, and friendship, you won't be able to help but fall in love with the characters and the world they're trying to survive in. It was so cool watching Reagan create a documentary of the game that has run their lives and really watch her world change as the characters opened their eyes and learned more about themselves and those around them.