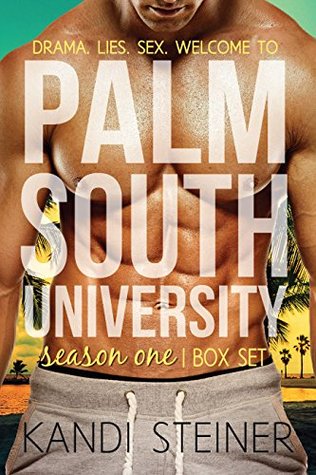 Drama. Lies. Sex. Welcome to Palm South University. The weather isn’t the only thing heating up in South Florida. At a school where fraternities and sororities don’t exactly play by the rules, relationships are bound to be tested. Parties and sex are definitely key ingredients in the Palm South recipe, but what happens when family issues, secret lives, and unrequited love get tossed in the mix? Follow Cassie, Bear, Jess, Skyler, Erin, Ashlei, and Adam as they tackle college at a small, private beach town university. Written in television drama form, each episode of this serial will pull you deeper and deeper into the world of PSU. Where the sun is hot and the clothes are scarce, anything can happen.

Going into this one, it was pitched to me as binging your favorite TV show on Netflix. Now, after reading PSU, I could not find a better way to explain it! Palm South University is gearing up for another school year, which means it's time for rush season. In other words? Parties and hookups galore with relationships and friendships forming and breaking within the blink of an eye. Seven students learn to forget their lives at home while losing themselves in the vices college has to offer. Normally I don't like it when there are more than two POVs, but I loved all of the characters in this book that I didn't mind how we got into the minds of seven of them. This read so much like a TV show because there were so many main characters whose stories all intertwined and affected one another. While I did favor some over the others (I loved Jess and Cassie and Adam), there wasn't a single main character who I disliked. And talk about the drama! So much crazy stuff was going down in this book and I gobbled up every second of it. While the ending was a little bit extreme and hard for me to believe, I still enjoyed the various dramatic elements our characters had to face. This was definitely a look at the crazier side of college, which made it so much like watching a drama-filled show about college (like Greek!). I'm definitely excited to pick up Season 2 and can't wait to see what happens to these characters during their second semester at PSU!