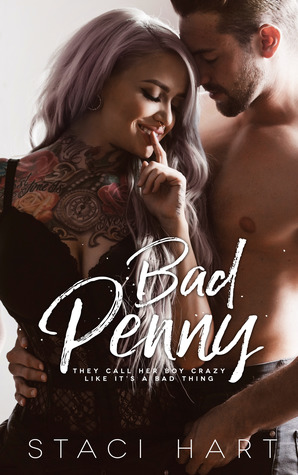 Nothing good comes after the third date.

Date three is the crucial point when things get real, which is exactly why I bounce out the door, twiddling my fingers at whatever poor boy I’ve left behind. Because if I stick around, one of three things will happen: he’ll profess his undying love, he’ll get weird and stalky, or I’ll go crazy. Like, Sid and Nancy crazy. Like, chase-him-through-the-streets-begging-him-to-love-me crazy.

Seriously, it’s better for everyone this way.

So when I meet Bodie, I figure it’ll be the same as it ever was. It doesn’t matter that he doesn’t put a single string on me. Doesn’t matter that he’s funny and smart and jacked or that he can play my body like a grand piano. Because even though I’m built for love, love has only carved me up like a Christmas ham.

Resistance is something I can only hang on to for so long, and he has persistence in spades. But my heart isn’t as safe as I want to believe, and neither is his. And the second I ignore my cardinal rule is the second I stand to lose him forever.

I was a little wary going into this book because I've only read one book by Staci Hart and I wasn't the biggest fan of it. I'm so happy that the main character was so unique and quirky and I absolutely loved her. Penny knows exactly what she wants when it comes to men. Three dates. After three dates, things get weird and either she or he gets obsessive. Everyone gets hurt. Penny has gone years with her rules and is as happy as can be. Until she runs into Bodie. From the minute she lays eyes on Bodie, there is an instant attraction she can't ignore. Bodie is gorgeous, but he's also got the brains to go with it. Developing a video game with his brother and friend, Bodie has just arrived in New York and is trying to chase his dreams. Penny soon becomes addicted to Bodie, not only for his body but also for his whit, humor, and caring nature. Penny begins to question her three date rule, but can she really risk another broken heart? From the start, I absolutely loved Penny's character. She is so blunt and to the point and I was laughing out loud so many times in this book. I completely understood her hesitance to start a serious relationship with anyone because of the unhealthy relationship she had in high school. It was fun watching Penny and Bodie have fun and constantly think about each other and question their relationship. Bodie was so into Penny but didn't want to freak her out, so he let her control the speed of their relationship. This, of course, made Penny question everything and their miscommunication was entertaining instead of annoying. And can we talk about Bodie?? I loved how sweet he was and learning about his past. It was cool how he was really into coding and was creating his own video game. He was so passionate about his project and Penny just took it in stride. His friend and brother were fun, but I wish we could have gotten to see more of that dynamic. Also, I understood that Penny really liked the more intimate relationship she had with Bodie, but I feel like too much of the story centered around their physical relationship. I could have lived with less intimate scenes and more scenes of Penny and Bodie in public together or with their friends. If you can't tell, I really enjoyed this book. Penny's character was refreshing and I loved how she said the things that everyone else thinks but are too scared to say out loud. Bodie was such a catch and I really enjoyed the lack of communication the two characters had because they didn't want to freak one another out. This book was so fun and you all definitely need to read it!