Book Review: How to Meet Boys by Catherine Clark

How to Meet Boys 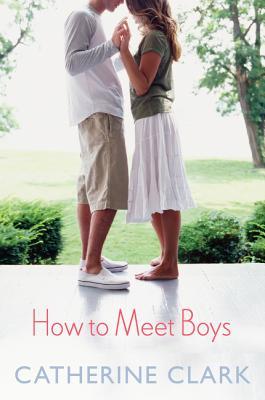 Summary: Lucy can't wait to spend the summer at the lake with her best friend, Mikayla. But when Jackson, the boy she's been avoiding ever since he rejected her, reappears in her life, Lucy wonders if this summer to remember is one she'd rather forget.
Mikayla's never had much luck talking to boys, but when she (literally) runs into the cutest guy she's ever seen, and sparks fly, she thinks things might be looking up...until she realizes the adorable stranger is the same boy who broke her best friend's heart.As things begin to heat up between Mikayla and the one guy she should avoid, will Lucy be able to keep her cool or will the girls' perfect summer turn into one hot mess?


Review: Catherine Clark has had a special place in my heart ever since I fell in love with her adorable YA romances way back in middle school. When I saw that she had recently published a new book, I couldn't be more excited. I've devoured pretty much everything she's written and couldn't wait to get into this one!
Lucy and Mikayla can't wait to spend the summer at the lake living in a cabin all by themselves. Lucy has been hired to work in her grandparent's apple shop, but the last thing she expects to find there is Jackson, the boy her grandparents have hired who also happens to be the boy who completely rejected and embarrassed her in 8th grade. Mikayla has never been able to talk to boys, but when she's literally almost run over by one, there's an instant connection and she can't stop thinking about him. Everything seems to be going perfect until Mikayla realizes her perfect match just so happens to be the one who had broken her best friend's heart. How awesome does that synopsis sound? Too bad the actual book fell completely flat for me. The first problem? The main characters! The chapters switched between Lucy and Mikayla's points of view and both of them sounded like they were 12 years old instead of 17 years old. Lucy was so hung up on her rejection and acted so immature when she figured out that MIkayla was falling for Jackson. Then, Mikayla LITERALLY cannot talk to boys. As a 17-year-old, I think her inability to even speak to a male was way too over-exaggerated. Even when she is able to talk to Jackson, their relationship turns on way too fast and I was not feeling the connection at all. She was so into him, but it just felt really stiff and not as developed as the relationship should have been. Not only did the main characters and romance fall flat for me, I also wasn't a fan of how their whole story was built up in general. Every person that came into their lives had some sort of quirk about them and then it was just kind of left at that. I feel like we really didn't get to know anyone, so I didn't really care about them at all. Ava's whole storyline was supposed to throw things for a loop, but it wasn't really that intriguing and its culmination just felt lackluster. The entire time I was reading, if I wasn't annoyed with how juvenile Lucy and Mikayla sounded, I didn't find myself caring at all for any of the characters or the story. While Catherine Clark sure does know how to write an adorable, lovable romance, that definitely did not show up in How to Meet Boys.