Book Review: Before You Break by Christina Lee

Before You Break (Between Breaths #2)
By Christina Lee
Release Date: October 7, 2014
Source: Publisher 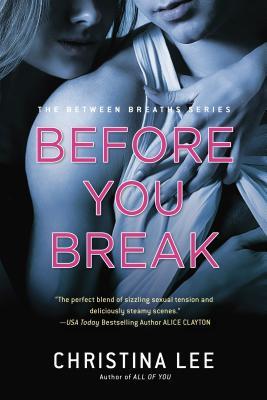 Summary: A college baseball star isn’t supposed to have skeletons in his closet. But Daniel Quinn is hiding a past so dark, he refuses to let anyone get close. Except there’s something about Ella Abrams that goes beyond attraction—something that makes him want to open up.
Ella has suffered enough heartache to fill one of her psychology textbooks, but she keeps that part of herself hidden behind a bubbly exterior. Until she receives an anonymous call while working a suicide help line and the voice on the other end touches something inside of her that she can’t ignore.Soon Ella and Quinn’s physical connection heats up, even as their revealing hotline talks intensify. But by the time Ella realizes that her seductive jock and her sensitive caller are the same guy, it might be too late to save him—or to stop herself from falling too far….


Review: I had super high hopes for this book. While I thought the one other book I've read by Christina Lee was okay, this one has over a 4 star rating and people have raved about it's emotional and intense storyline. When I read it, though, I wasn't a huge fan of the writing or how quickly the relationship developed between the main characters.
Daniel Quinn looks like the perfect college baseball star on the outside, but on the inside he's harboring guilt over his dark past he's dedicated his life to paying back for. When the gorgeous Ella Abrams catches his eye, Quinn knows he could never be good enough for her. Ella has known loss after her brother committed suicide, but she doesn't let that overshadow her bubbly personality and need to help others. When Ella finds herself paying more and more attention to Quinn, she's ready to go all in, but she can feel Quinn holding something back from her. Little does she know, she and Quinn are a lot more similar than she had first thought. From the beginning, I knew that this was going to be an intense story. Both characters have dealt with a lot of loss and pain in the past, and Quinn still hasn't overcome the guilt he feels over losing his best friend. While I did enjoy that emotional side of the story, I feel like when Ella and Quinn finally got together, their attraction didn't develop enough but was rather all of the sudden super intense. I wasn't a fan of how their more intimate moments were described and wasn't as connected to their story as I wanted to be. I liked Ella enough, but some things about her personality weren't exactly my favorite. She just seemed so naive when it came to her boyfriend in the beginning and she seemed a bit too perfect for Quinn. I don't know, I just wish she had more flaws than being more "curvy" than girls Quinn usually dated. I enjoyed how much Quinn and Ella bonded over their similarities and Quinn couldn't resist Ella, it just seemed a bit too easy when they both realized how attracted they were to each other. Overall, this was just another okay read from Christina Lee. I wasn't head over heels in love with the story and wasn't as emotionally connected to the characters and their dark pasts as I wanted to be.