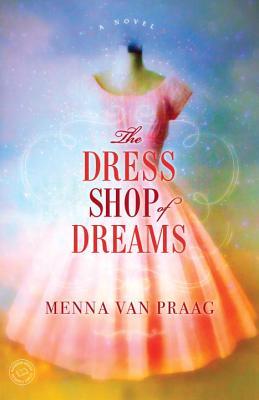 Summary: Since her parents’ mysterious deaths many years ago, scientist Cora Sparks has spent her days in the safety of her university lab or at her grandmother Etta’s dress shop. Tucked away on a winding Cambridge street, Etta’s charming tiny store appears quite ordinary to passersby, but the colorfully vibrant racks of beaded silks, delicate laces, and jewel-toned velvets hold bewitching secrets: With just a few stitches from Etta’s needle, these gorgeous gowns have the power to free a woman’s deepest desires.
Etta’s dearest wish is to work her magic on her granddaughter. Cora’s studious, unromantic eye has overlooked Walt, the shy bookseller who has been in love with her forever. Determined not to allow Cora to miss her chance at happiness, Etta sews a tiny stitch into Walt’s collar, hoping to give him the courage to confess his feelings to Cora. But magic spells—like true love—can go awry. After Walt is spurred into action, Etta realizes she’s set in motion a series of astonishing events that will transform Cora’s life in extraordinary and unexpected ways.


Review: I really enjoyed The House at the End of Hope Street, so when I saw that Menna van Praag had a new book coming out, I couldn't wait to read it. This one sounded like a cute tale of finding love where you least expected it.
Cora Sparks has dedicated her life to following in the footsteps of her scientist parents who mysteriously died when Cora was little. Cora has dedicated her life to her work, which means she has time for nothing else in her life. Her grandmother Etta owns a dress shop where, with a few stitches, each dress has the power to unleash a woman's deepest desires. Etta is determined to push Cora to start living her life, which includes persuading Walt, the man who owns the bookshop down the street and who has been in love with Cora since they were children, to finally tell Cora how he feels. With a little magic from Etta, though, things start to go awry and she doesn't know if anything will go the way she had planned…From the start, I knew this was going to be a cute book. Etta is such a sweet woman and I love how she puts herself all up in Cora's business. She's so sneaky! But, of course, not everything goes exactly how she wants it to. It's so adorable how much Walt loves Cora but has never, ever told anyone. Even when he gets a little courage from Etta's magic, it's still hard for him to approach Cora and tell her how he feels. Cora has to be open to love, too, and see how it's been right in front of her all this time. While the romance was definitely a major part of the storyline, Cora was also dealing with some very personal problems involving her parents' mysterious death. How did they really die and what were they working on when that happened? Cora starts remembering all of her repressed memories and starts digging into the mystery behind the death of her parents. I enjoyed how Cora was trying to understand her past and the mystery was definitely intriguing. Would Cora discover the truth, or did they they really just die in an accidental fire like the police said? While it wasn't the most exciting or deep book I've ever read, The Dress Shop of Dreams was a cute read that I enjoyed. The characters were endearing and you couldn't help but hope for the best of them. If only they would open their eyes to what was right in front of them, they'd be perfectly happy! Of course, life doesn't happen that way and the characters have to have a little push in the right direction to see where true love really lies.