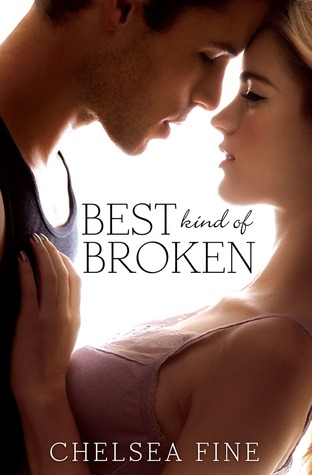 Summary: Pixie and Levi haven't spoken in nearly a year when they find themselves working―and living―at the same inn in the middle of nowhere. Once upon a time, they were childhood friends. But that was before everything went to hell. And now things are... awkward.
All they want to do is avoid each other, and their past, for as long as possible. But now that they're forced to share a bathroom, and therefore a shower, keeping their distance from one another becomes less difficult than keeping their hands off each other. Welcome to the hallway of awkward tension and sexual frustration, folks. Get comfy. It’s going to be a long summer.

Review: Wow. I've been wanting to read a book by Chelsea Fine for so long and I'm so happy I did! Best Kind of Broken was a beautiful, heart wrenching story that I couldn't put down!
Levi and Pixie used to be best friends, but now they haven't spoken for almost a year after something terrible ripped them apart. So when they find themselves both working at Pixie's Aunt's inn and living next door to each other, they do their best to avoid each other and the awkward tension between them. Living next to each other, though, proves difficult to keep their distance and heat starts to sizzle between them. But can either of them forgive themselves over what happened in the past? I knew this one was going to be a romance, but I had no idea this was going to be such an intense and emotional romance! Something very drastic and heart wrenching happened between Levi and Pixie in the past, but you aren't sure what exactly happened between them until well into the story. All you know is that both of them are still trying to heal and want absolutely nothing to do with each other. But that chemistry! Oh my gosh, the sexual tension just sizzles through the pages and you're constantly hoping that they'll give in and finally kiss each other already! The alternating chapters were perfect for this book so that we could see the tragedy and healing from both Levi and Pixie's perspectives. They both blame themselves for what had happened, while thinking that the other one hates them. Little do they know, they both just need to forgive themselves and heal with each other. Needless to say, I loved both Levi and Pixie and their heart wrenching journey towards confronting their past and opening themselves up to their future. If you haven't year, you must read Chelsea Fine's Best Kind of Broken. I know I definitely can't wait to pick up the second book of this series and devour Daren's story. Nothing like some romance and insane chemistry to make a book impossible to put down!