Blog Tour + Giveaway: Just in Time For a Highlander by Gwyn Cready

Just in Time For a Highlander 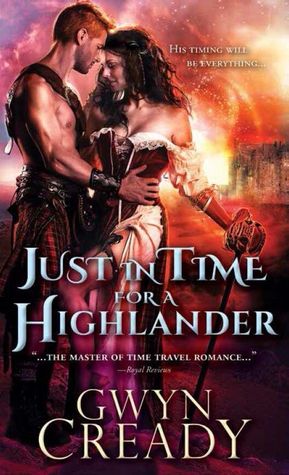 For Duncan MacHarg, things just got real…
Battle reenactor and financier Duncan MacHarg thinks he has it made—until he lands in the middle of a real Clan Kerr battle and comes face to face with their beautiful, spirited leader. Out of time and out of place, Duncan must use every skill he can muster to earn his position among the clansmen and in the heart of the devastatingly intriguing woman to whom he must pledge his oath.

Abby needs a hero and she needs him now
When Abigail Ailich Kerr sees a handsome, mysterious stranger materialize in the midst of her clan’s skirmish with the English, she’s stunned to discover he’s the strong arm she’s been praying for. Instead of a tested fighter, the fierce young chieftess has been given a man with no measurable battle skills and a damnably distracting smile. And the only way to get rid of him is to turn him into a Scots warrior herself—one demanding and intimate lesson at a time.

“Undine, do you see what your magic has wrought?” Abby stabbed a finger in Duncan’s direction.
The woman gave him a full look and her eyes widened. “Oh. Oh, dear.”
“What magic?” Duncan demanded.
Undine regarded him thoughtfully. “He’s handsome, at least. And tall. That could be useful. But that hair…”
“If I wanted handsome, Rosston would certainly do. He at least wields a real sword.” She took    Undine by the elbow and turned her away from Duncan. “The poor man appears to have no skills beyond his fists,” she said in a lowered voice. “And I think he’s addled in his head—like Hal the sheep shearer.”
“What were you thinking?” Undine demanded.
“What was I thinking?! ’Twas your herbs.”
“I mean when you opened the paper.”
“I didn’t open the paper. It was shot out of my hand.”
“All of it?!” Undine paled.
“Except for the part that flew in my mouth.” Abby wiped the back of her hand across her tongue and made a sharp sound of disgust. “It tasted like burnt groats.”
Duncan had had enough of being ignored. “What herbs? What magic? What are you talking about? Did you bring me here?”
Undine considered. “You could try to make do with him.”
“Make do?!” Abby cried. “You make do with him! Can’t you see this is the last thing I need with the clans right now?” She pulled herself onto the horse. “You need to get rid of him.”
The “get rid of him” made Duncan’s stomach tighten. “No. Wait—”
“Abby?” a voice called from beyond the trees. “Abby, are you there?”
“Oh, God help us, it’s Rosston.” Abby gave Duncan a warning look. “Don’t say another word.”
“No!” Duncan grabbed her pommel. “I want to go home! Send me home! I don’t know what you two witches have done.”
“Silence, you fool.” She jerked the reins in an effort to keep the beast from lurching. The arrow fell from her bow.
A kilted clansman crested the rise.
“You, there!” Duncan called to the man. “Help me. These women have—”
Duncan felt a thwack on the head, and the world went dark.

a Rafflecopter giveaway
Posted by Jessica (Peace Love Books) at 6:00 AM