Book Review: What a Woman Gets by Judi Fennell 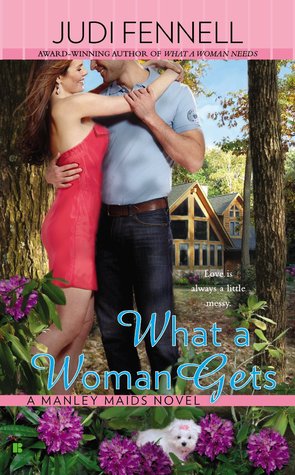 Summary: What happens when three irresistibly sexy brothers lose a poker bet to their enterprising sister? They get hired out for her housecleaning venture. Now, the Manley Maids are at your service. Satisfaction guaranteed. It’s what a woman gets...

Business owner Liam Manley has no patience for women like Cassidy Davenport—women happy to spend a man’s money without giving a thought to any actual work. But to make good on his bet, Liam must not only tolerate the couture-clad socialite, he’ll have to clean up after her. Until Cassidy’s father suddenly cuts off her finances. With no money and no home for Liam to clean, Cassidy has no choice but to accept a job offer—as Liam’s new maid…

Liam is eager to teach her a lesson about the real world, but he winds up learning a few things himself. Free from her father’s influence, Cassidy can finally pursue her own life, and winds up showing Liam how resourceful and determined she can be. Not to mention how sexy she is with (or without) that designer wardrobe. But when sparks fly between them, will it be true love…or just another messy affair?

Review: It's no question that whenever I pick up a book by Judi Fennell, I'm bound to love it. There's nothing better than a man in a uniform and the Manley men definitely live up to their name as they take on their sister's cleaning business and fall for their clients who end up to be nothing like as they appear…
Liam has been burned by a girl who's only after his money, so when he first meets rich and spoiled Cassidy Davenport, he instantly despises her and her lifestyle. Little does Liam know, Cassidy hates living under her father's thumb and yearns to go off on her own and redesign furniture, a passion of hers. But when her father finds out about her hobby and decides to cut her off to teach her a lesson, Liam is the only person Cassidy can turn to. Liam can't wait for Cassidy to finally have a reality check of what life is really like without unlimited money, but he soon learns what a passionate and talented woman Cassidy really is. But can he trust her when he was so easily taken advantage of in the past by women just like Cassidy? From the start, I love how much Liam hates Cassidy. He does not want another woman to use him for his money, and all he sees in Cassidy is a spoiled socialite who wouldn't know what to do without the money from her father. Little does he know, Cassidy is a more complex woman who yearns to have success on her own without her father's name and money buying her way in. Liam is such a good, well mannered guy, though, that when Cassidy is literally thrown out on the streets with nothing, he doesn't hesitate to offer her a place to stay. Of course, things start to heat up between them and I love how they both try to resist their attraction because of their so called "hatred" for each other when they first met. What I found interesting about this book is that it's supposed to be happening at the same time the previous two books of the series are, instead of after the previous books like most series do. In this case, we get to see the couples from the first two books as they progress in those books, so I loved when Liam and Cassidy got together for a game of tennis with Sean and Livvy from the first book before Sean and Livvy officially get together. Liam's family is very much a large part of this novel and I love seeing how close they all are and how they're all falling in love as they work for their sister after losing the bet to her. Overall, Manley Maids is a quirky, adorable series you just can't miss out on. Each of the women of these novels have been so unique and lovable and you can't help but eagerly wait for the Manley brothers to fall for each of them. Cassidy was great and her dog was such a fun addition into the story, especially when Liam revealed how much of a soft spot he had for the furry animal he claimed he hated. If you haven't yet, any contemporary romance fan has to pick up the Manley Maids series to meet three irresistible brothers who definitely meet their matches.