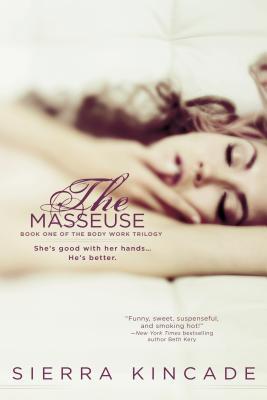 Summary: Anna Rossi lives by one simple rule: don’t get attached, don’t get hurt. But Alec Flynn doesn’t play by the rules…
Anna never takes on a massage client without screening him first, but the paycheck offered by billionaire Maxim Stein is too good to turn down. Stein is the richest man she’s ever laid her hands on, and despite the risks, she trusts that she can take care of herself. After all, she’s handled difficult clients in the past. What she isn’t prepared for is getting caught in a compromising situation by Maxim’s tall, dark, and gorgeous bodyguard—or the desperate desires he awakens in her…Alec is dangerous. The mysterious, hard-bodied man is completely irresistible and won’t be refused, no matter what walls Anna puts up to protect herself. But as Anna falls fast for his careful ministrations and mind-blowing skills, she begins to realize that giving herself over to a man with so many secrets isn’t just putting her heart at risk—it’s endangering her life…


Review: From the moment I laid eyes on this book, I was intrigued by the story. As a masseuse, the main character falls for one of her client's bodyguards. Who wouldn't love a dark, dangerous man who has some secrets of his own?
Anna never stays in one place for too long, and she's chosen Florida as her next home, close to her childhood best friend. Now a masseuse, Anna can't turn down the chance to take on the very rich Maxim Stein as her next client. When she arrives at his massive home, though, it's his dark and gorgeous bodyguard who catches her eye. As Anna gets to know Alec, though, she knows he's hiding some pretty big secrets that he refuses to open up about. Can Anna really trust him, or is he even more dangerous than she had first thought? I knew this book would be steamy, but I had no idea there would be so much suspense and danger! Anna sure did pick an interesting client when she agreed to do house visits with Maxim. I loved her immediate connection with Alec when she first meets him. Talk about chemistry! Of course, Anna is a very guarded person so Alec has to work quite a bit to get Anna to trust him and let him take her out. Their relationship developed slowly and then very quickly and I loved every bit of it. As for the suspense, holy cow! I had no idea what secrets Alec was hiding, but I sure felt as frustrated as Anna did when he kept on refusing to open up to her. When the moment came where it was impossible to keep his secrets any longer, things became pretty dangerous and I was definitely on the edge of my seat. Who could Anna really trust and what was Alec really up to with his work for Maxim? What started out as a steamy romance turned into a suspenseful story that revealed danger and secrets around every corner. Overall, The Masseuse definitely did not disappoint. I wish we had more of Anna's past than what she had revealed to Alec, but I enjoyed how they slowly learned to trust each other despite the numerous points of doubt that threatened their relationship. If you want a lot of steam with some serious moments of suspense thrown into the mix, you should definitely pick up a copy of The Masseuse.