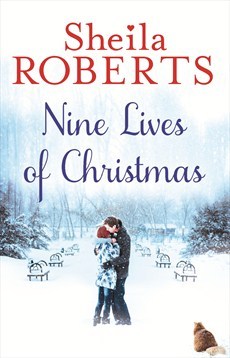 Summary: When a guy is in trouble, he starts making deals with his Creator . . . and Ambrose the cat is no exception. In danger of losing his ninth and final life, Ambrose makes a desperate plea to the universe. He'll do anything if he can just survive and enjoy a nice long, final life. His prayer is answered when a stranger comes along and saves him-and now it looks like he has to hold up his end of the bargain.

The stranger turns out to be a firefighter named Zach, who's in need of some serious romantic help. If Ambrose can just bring Zach together with Merilee, the nice lady who works at Pet Palace, it's bound to earn him a healthy ninth life. Unfortunately for Ambrose, his mission is a lot harder than he ever thought. Merriliee is way too shy to make the first move on a ladies man like Zach, and Zach thinks he's all wrong for a nice girl like Merrilee. Now it's going to take all of Ambrose's feline wiles-and maybe even a good old fashioned Christmas miracle-to make them both realize that what they're looking for is right in front of their eyes.


Review: I am a huge animal lover, so I knew that I had to read this adorable Christmas story that revolved around a cat trying to help a hunky fire fighter find love during the holiday season…
Ambrose the cat is homeless and cold, so he decides to make a deal to save his 9th and final life. Little does Ambrose know, his job is to help Zach find love and Ambrose knows the perfect woman for him. Merilee has never been the kind of girl to stand out or get attention from guys. On top of that, her life has definitely not gone her way after she had to stop vet school to work at the Pet Palace because she didn't have enough money to finish school. Ambrose is determined to get those two together, but with Merilee being too shy to make the first move and Zach not ready for a serious commitment, it's going to take a Christmas miracle to finally get those two together…
This book was just super adorable. I mean, when the first chapter is from the point of view of a cat, you know it's going to be a cozy romance that you can fly through in one night. Ambrose is a fun character and I thought it was cute how it was his job to push Merilee and Zach together. I loved how Merilee was in love with animals and how Zach gave into Ambrose's cuteness and took him in instead of letting him freeze to death outside. This allowed Zach and Merilee to bond over the cat and get to know each other despite Merilee's shyness and Zach's commitment phobia.
While the romance was the main focus of this novel, Merilee and Zach both had family problems and personal issues they had to work through as well. Zach's parents had divorced a while ago and he had to deal with his relationship with both parents, as well as his mom's new family. Then, Merilee had to worry about not being able to go back to vet school and she always feels in lost in the shadows to her amazing, gorgeous sisters. Merilee and Zach have a lot to deal with, and now they have to fight their feelings for one another because of their own individual insecurities. Ugh, you just want them to get together already! But that's Ambrose's job to finally throw the couple together and get them to admit how they really feel for each other.
While it wasn't the most complex story, The Nine Lives of Christmas is a cute Christmas story with furry friends that bring two people together who have been alone for long enough. If you want an adorable holiday romance that you're bound to devour in one sitting, you should check out Sheila Roberts' newest Christmas tale.