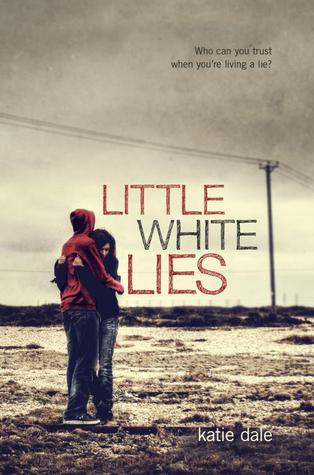 Summary: The first time Lou meets mysterious Christian, she knows he is The One. But Christian is hiding a terrible secret. Why does he clam up every time Lou asks about his past? Why doesn’t he have any family photos, and why does he dye his blond hair black? When Christian’s house goes up in flames, his tires are slashed, and he flees for his life, Lou insists on going with him. But as Christian’s secret is unveiled in front of the whole world, it seems everything he’s ever told Lou is a lie. Can what the media are saying about him really be true? Should Lou trust him? Or is she in grave danger? And what if their accidental meeting wasn’t an accident at all…?

Review: Holy moly, what did I just read?? I was NOT expecting Little White Lies to go from a cute college romance to an insane story of murder, mystery, and lies that build and build until there's no way of knowing what's true and what's not.
The moment she lays eyes on Christian, Lou can't stop thinking about him. But when she finally gets the chance to talk to him, it's clear that Christian's hiding something. Lou knows nothing about him, but she knows how she feels and she's willing to trust him when he asks her to. So when Christian is in danger and has to flee, Lou insists on going with him. But as Christian's secrets start to unravel, Lou has no idea if she can really trust him or if everything he's ever said to her has been a lie. Wow. This book. SO GOOD. Haha, okay, let me explain in full sentences now. First off, I really loved how this book was set in England. And in University! I rarely find books that are contemporary, in London, and about college-aged people. I loved how this one started off as an adorable contemporary romance where Lou like Christian and was the only girl Christian showed any interest in after always turning down girls and any interest in a relationship. It was sweet watching them get to know each other and trust each other despite the secrets that both of them are hiding. The real reason I loved this book, though, was the shocking truth revealed about halfway through the book. I had to reread the page that turned this book upside down about 3 times before I fully believed what I had just read. It was crazy! The blurb says that this book is for fans of Pretty Little Liars, and I definitely agree! There is murder and so many secrets surrounding that incident that you really have no idea who is telling the truth or what even happened until the very end. It's crazy and impossible to put down! If you're a fan of YA books that have a little romance, a little thrill, and a little mystery, you definitely have to read Little White Lies. A surprise lies behind every corner and you won't be able to stop reading until you figure out the truth and who exactly you can trust. I'm so happy I had the opportunity to read this book because I definitely won't forget it anytime soon!

Posted by Jessica (Peace Love Books) at 8:26 AM