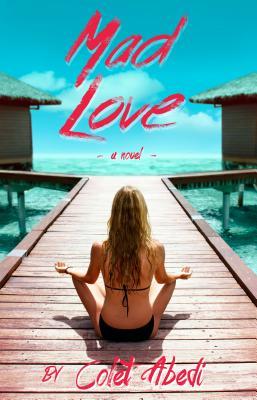 Summary: 23-year-old aspiring artist Sophie Walker can think of no better place than the exotic paradise of the Maldives Islands to escape the wrath of her controlling parents, the monotony of her boring legal work and her passionless boyfriend. With her two best friends along for the ride and to help her find herself again, Sophie is not prepared for the enigmatic Clayton Sinclair. Clayton comes from another world of privilege that seems like a fantasy to Sophie.  Can this man introduce her to the passion & seduction she never realized she was desperately searching for? Sophie quickly becomes ensnared in Clayton's seductive web until a shocking treachery makes her question her judgment and actions…

Review: With such a gorgeous cover and over a 4 star rating on Goodreads, I was definitely excited to read Mad Love. However, once I started the story, I was sick of the roller coaster relationship by the second time the couple "broke up" and how over-the-top the emotions were.
Sophie Walker is a 23-year-old artist who is tired of being put down by her controlling parents for her decision to be an artist. She can't think of a better place to get away with her two best friends than the Maldives Islands. From the moment the vacation starts, Sophie can't take her eyes off of the impossibly attractive and dominating presence of Clayton Sinclair. Clayton is a whole other kind of man than Sophie has even known, and she doesn't know if she's ready for a man like him. But can he be the passion and seduction Sophie has been yearning for? From the start, I found it hard to get into this book. I thought I would love Sophie and how inexperienced and unsure she was when it came to men. But right when she meets Clayton, they're both instantly way too into each other and Clayton basically claims her as his own. Then, Sophie is so insecure and has a freak out that they're breaking up pretty much every 20 pages. I get that she was insecure because she's never been in a relationship with a guy like Clayton, but oh my gosh, grow up! She could have actually tried to talk to him when she completely misinterpreted situations and thought that their "relationship" was over. Just talk to each other! As for Clayton, that guy was a bit too much for my taste. He would literally throw Sophie around and she didn't see anything wrong with that! He was hot and then cold and then hot again. He also had quite the temper and I didn't really get why he was so infatuated with Sophie. Then, the ending of the book just made the whole story I just read completely pointless. I mean, come on. I finished and was SO MAD that it would end that way and say, oh this is all continued in book two! No thanks, I'd rather not read about them getting together, breaking up, then getting together again another 10 times in another book. While Mad Love has some awesome reviews on Goodreads, this was definitely not a read for me. I was too annoyed with how insecure and non-communicative Sophie was and how ridiculous Sophie and Clayton acted when they got mad at each other. I wasn't a fan of this one, but if you're into dominating men and wishy-washy relationships, then you might want to give it a try.