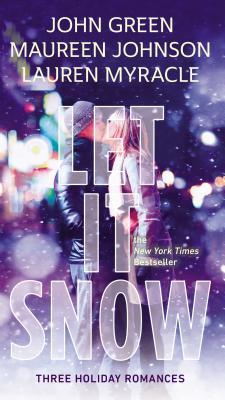 Summary: Sparkling white snowdrifts, beautiful presents wrapped in ribbons, and multicolored lights glittering in the night through the falling snow. A Christmas Eve snowstorm transforms one small town into a romantic haven, the kind you see only in movies. Well, kinda. After all, a cold and wet hike from a stranded train through the middle of nowhere would not normally end with a delicious kiss from a charming stranger. And no one would think that a trip to the Waffle House through four feet of snow would lead to love with an old friend. Or that the way back to true love begins with a painfully early morning shift at Starbucks. Thanks to three of today’s bestselling teen authors—John Green, Maureen Johnson, and Lauren Myracle—the magic of the holidays shines on these hilarious and charming interconnected tales of love, romance, and breathtaking kisses.

Review: I have been meaning to read this collection of stories ever since it came out, but I never have time around the holidays to grab a copy from the library and read it. This year, I finally bought my own copy and snuggled up on Christmas Eve with the three stories from some pretty great YA authors.
In three charming stories of love, the holidays are brought to life as three very different characters find the magic in Christmas, discover true friendship, and fall in love in the most unlikely of places. Jubilee Express by Maureen JohnsonThis story was by far the best of the collection. Starting off with the quirky and lovable character of Jubilee, I loved her story of getting stuck on the train to visit her grandparents after her parents were arrested. Talk about a crazy Christmas! My favorite part, though, was definitely Jubilee's love interest. Jubilee is so sure she has the perfect boyfriend and is leading the perfect life, but she quickly realizes how little interest her boyfriend actually has in her while she's away and how the guy in front of her is so perfectly imperfect. So much happened in this short story and I loved every minute of it. 5/5 starsA Cheertastic Christmas by John GreenI'm not really a fan of stories from a guy's point of view, so right away I wasn't sure how much I was going to like this one. From the start of this story, though, it was pretty obvious it was going to be the cliche story of about the guy not realizing his girl best friend who's always been one of the guys is really the love of his life. I thought the premise of them trying to get to the Waffle House full of cheerleaders was a bit annoying and not a whole lot had happened. But their journey there was fun and perfect for the two characters to fall in love. 4/5 starsThe Patron Saint of Pigs by Lauren MyracleThis one was by far my least favorite of the three stories. The main character, Addie, was just so annoying. She was whining about how she cheated on her perfect boyfriend and was so sad he wouldn't forgive her because she obviously didn't mean to make out with another guy. At one point, she made it seem like it was her boyfriend's fault she had to cheat, not her own. Every single character told her what an awful person she was and she just complained some more! Ugh, no thanks. For me, the ending was wrapped up too quickly and easily and I was not satisfied with how Addie's life was all better with pretty much no effort from her. With no sympathy for the main character, I just couldn't enjoy the story. 3/5Overall, this book started off on a super high note, but sadly went down from there. The stories kind of intertwined with characters from the previous stories showing up in later stories, but it wasn't as cohesive as I would have liked it. As a whole, though, it was a cute Christmas read that definitely gave me some more holiday spirit.