Book Review: If I Only Had a Duke by Lenora Bell

If I Only Had a Duke 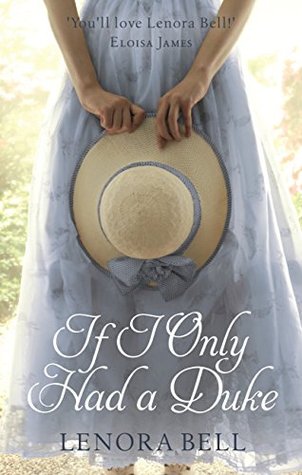 After three failed seasons and a disastrous jilting, Lady Dorothea Beaumont has had more than enough of her family's scheming. She won't domesticate a duke, entangle an earl or vie for a viscount. She will quietly exit to her aunt's Irish estate for a life of blissful freedom. Until an arrogant, sinfully handsome duke singles her out for a waltz, making Thea the most popular belle of the season.

Well, the duke ruined her plans and now he'll just have to fix them.

Dalton, Duke of Osborne, is far too heartless for debutantes or marriage - he uses dalliances to distract from his real purpose: finding the man who destroyed his family. When his search leads to Ireland, the last thing he needs is the determined, achingly innocent Thea, who arrives in the dead of night demanding he escort her to her aunt. His foolish agreement may prove his undoing. The road to the Emerald Isle is fraught with unforeseen dangers, but the greatest peril of all might just be discovering that he has a heart . . . and he's losing it to Thea.

Historical romances always put a smile on my face, especially when they're actually done right. Lenora Bell has mastered the art of taking unique women who go against the norms of society and tame the rakes who were previously untamable and quite irresistible to any women who crossed their paths. Can you say, yes please?!?!Lady Dorothea was bred to find a handsome duke to snag and marry, but what her mother failed to do was socialize her perfect daughter. Any time she's near a handsome man, Thea finds herself tongue-tied or giggling like a fool, neither of which is attractive to any man. After spending some time with her Aunt in Ireland, Thea is determined to live life as a spinster there, especially after she uncovers lost paintings in the attic of the estate next door. The owner of the estate happens to be the infuriating Dalton, Duke of Osbourne, who loves pushing Thea's buttons. One dance in London and Dalton has all of the men pining after Thea, which is the last thing she wants. Dalton finds himself being forced to escort Thea back to her Aunt's house in Ireland to help her escape a horrible future trapped in a loveless marriage. Oh, this book. I was so intrigued by Thea from the first book and I loved how unsure and shy she was around anyone of society. She was perfectly happy retreating to Ireland studying books and paintings, which are her passions. Of course, she started to clash with Dalton before they even met when she discovered the priceless paintings in his attic. I loved how she forgot being shy and let her passions drive her actions around the duke. From the start, they definitely intrigued each other, but neither one of them could possibly trust each other after how they were both raised. And can we take some time to talk about Dalton? Because, yum! Seriously, there is nothing better than a rake who falls head over heels, quite unexpectedly, for a woman who is definitely not his usual type. Dalton had such a soft heart despite the careless attitude he gave off to society. Thea saw right through his facade from the moment she met him and I loved how they really understood each other the more they got to know each other. Thea was so smart and it was great seeing someone challenge Dalton and prove to him that he actually had a heart. If you're a fan of historical romances, Lenora Bell is an author you can't miss. I am crossing my fingers that Patrick gets the next book because I NEED more of these characters! I have yet to meet a character I didn't completely fall in love with in Lenora's books and I'm dying for a duke of my own!

Posted by Jessica (Peace Love Books) at 3:00 AM