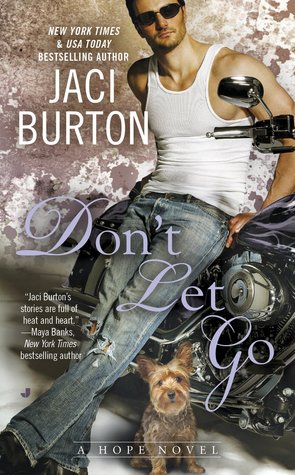 Brady Conners is hardly the settling type, but when tragedy strikes in his family, he has no choice but to return home to Hope, Oklahoma. Setting up shop to work on custom motorcycles and pass the time, Brady has no intention of letting anyone get close—until he meets Megan.Pastry shop owner Megan Lee is drawn to quiet, brooding Brady. Their connection is undeniable, and it quickly develops from physical attraction into something much stronger. But with Brady putting up barriers, Megan is afraid to truly open her heart—unless she can convince him to let go of the past…

I have lost count of how many Jaci Burton books I've read now. I can always count on her for a sweet romance and I was super excited to read the sixth book in her Hope series. While it was fun visiting the small town of hope again, I was sad the story spent so much time on the other characters of the town and left our main characters lacking in depth and development. After tragedy struck his family, Brady Conners distances himself from everyone, including his own family. Starting a relationship is entirely out of the question. Megan Lee is intrigued by the quiet, serious Brady and is tired of being single while all of her friends are settling down and having babies. While the two have an undeniable attraction to one another, can they really start a relationship when they both want entirely different things? I am a huge fan of stand-alone series because that means that each book is its own story but we still get to see the cast of characters from the previous books. This book, though, seemed to rely too much on the storyline of the other characters. Megan was constantly catching up with them and talking with them about their lives and I feel like we lost getting to know Megan more. I wasn't invested in her relationship with Brady as much as I felt like I should have been. Yeah, I wanted them to get together, but I didn't really feel the romance of their relationship. I loved the beginning of this series, but the last few books have lost my interest. I didn't really care for Megan's story and found myself rushing through the end of the book just to finish. While I liked Brady, he wasn't someone that I found myself fawning over and hoping that Megan could finally tame. While the story was nice enough, it was missing the connection between the characters and with the reader. I went into this one hoping it was as good as the beginning of the series, but unfortunately I was met with another lackluster continuation of the series. Things got a little too cheesy when time was spent with the past characters and I just wanted more from our main couple. Not a bad read, but a disappointing one for this series.