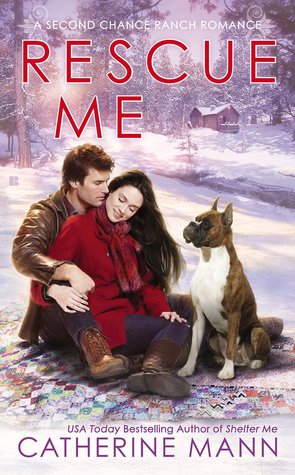 Summary: Detective AJ Parker left undercover work in Atlanta to join a small-town Tennessee police force, hoping for an easier workload and the solitude of his cabin. But the scars left by AJ’s previous work are more difficult to escape than he thought…
Mary Hannah Gallo works with the Second Chance Ranch Animal Rescue to train therapy dogs for traumatized patients. It isn’t easy, but her life is under control—until she meets the broodingly sensual AJ, who rattles her composure all the way to her toes.After an assignment confiscating dogs from a backyard breeder reveals a dangerous drug operation, AJ must work with sexy perfectionist Mary Hannah to train an abused rescue dog—a dog now named Holly. While Holly proves to these two very different people that opposites can, in fact, attract, she also knows more than a few explosive secrets that could heal—or divide—the entire town.

Review: I was so beyond excited to read Rescue Me. I was a big fan of the first book in the Second Chance Ranch series and I'm a huge sucker for any romance that has to do with animals. For some reason, though, I couldn't really get into the story and it ended up taking me forever to read.
Detective AJ Park was letting his emotions get the best of him as an undercover cop in Atlanta and knew that he had to leave before he endangered not only himself but the rest of his force as well. He moves to a small town department in Tennessee hoping for less stress and more time to himself. What he's finally there, though, he finds Mary Hannah Gallo, a woman he had a one night stand with who works for the Second Chance Ranch animal shelter. After a drug bust that revealed abused dogs used for breeding, Mary Hannah and AJ are forced to work together. Still showing signs of stress, AJ finds himself asking for Mary Hannah's help to train one of the rescued dogs named Holly for him. While Mary Hannah does her best to keep her distance from the temptation of AJ, Holly does her best to bring those two together. I don't remember how it was in the first novel of this series, but I wasn't a huge fan of the parts where it was from the point of view from Holly (the dog). Some things made Holly seem too human and not a realistic animal, which hindered my enjoyment of the novel. I know it was supposed to be cute with Holly deliberately trying to get AJ and Mary Hannah together, but I think I would have liked the story better if she were just a regular dog who needed some TLC after being abused for so long. I really loved how training Holly is what brought AJ and Mary Hannah together and how Holly really did begin to grow on AJ, but I would have liked a more realistic sense of the dog over the cutesy, exaggerated personality we got. As for the romance, I enjoyed it a lot, but I felt like I had missed a pretty big moment between the two main characters before the book even started. Apparently AJ and Mary Hannah had a one night stand, but none of it was in the book and it was only sometimes talked about or alluded to. There were details about that night that I was like, did that really happen? Since when? I wish we had either witnessed that moment or gotten a quick, full rundown in order to keep the story straight instead of trying to sort of piece it together on our own. Other than that, though, I thought their relationship was cute and enjoyed how it was so hard for them to resist each other. I did think that the end "secret" that was thrown in to add some suspense was a bit too abrupt and not really all that necessary for the story. Also, I didn't really care for Lacey's story that took up quite a bit of this book for a secondary character. I was there for AJ and Mary Hannah and didn't like having to spend so much time on Lacey and her romance problems. Overall, this was a great romance with just a few problems in my eyes. I'd prefer a more subtle animal character rather than such an overt one that was found in the story and I wanted even more Mary Hannah and AJ and less attention on one of the secondary characters. I still adored the animals in the book and loved how rescued dogs were the key to bringing together two people who were trying their best to stay apart.

Posted by Jessica (Peace Love Books) at 6:33 AM