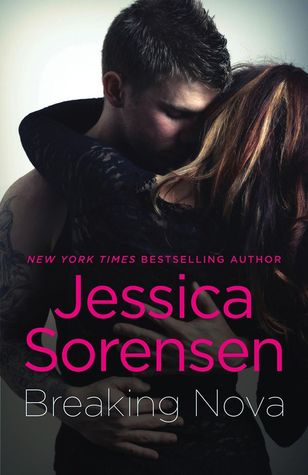 Summary: Nova Reed used to have dreams-of becoming a famous drummer, of marrying her true love. But all of that was taken away in an instant. Now she's getting by as best she can, though sometimes that means doing things the old Nova would never do. Things that are slowly eating away at her spirit. Every day blends into the next . . . until she meets Quinton Carter. His intense, honey brown eyes instantly draw her in, and he looks just about as broken as she feels inside.
Quinton once got a second chance at life-but he doesn't want it. The tattoos on his chest are a constant reminder of what he's done, what he's lost. He's sworn to never allow happiness into his life . . . but then beautiful, sweet Nova makes him smile. He knows he's too damaged to get close to her, yet she's the only one who can make him feel alive again. Quinton will have to decide: does he deserve to start over? Or should he pay for his past forever?

Review: There's no question that I love Jessica Sorensen's writing. Not only are her book covers always gorgeous, but the stories are so emotional and really explore the gritty reality of relationships. When I had the chance to review her Nova series, there was absolutely no way I was going to pass that up!
After losing the person closest to her, Nova Reed doesn't know how to live anymore. She hasn't touched her drum set since her loss and relies on her trusty routines to get through each day. The moment she meets Quinton Carter, though, Nova finds her routine life threatened by the guy who reminds her so much of what she lost. Little does she know, Quinton has known his fair share of loss and finds it a struggle to make it through each day. Quinton knows that Nova is too good for him and the lifestyle he's chosen to cope with his mistakes, but he finds it harder and harder to be the good guy and let her go…Okay, so first off, I've got to say there is a lot of drug use in this book. A lot. I think that drugs are a MAJOR turn off with any guy, whether in real life or in books, but it didn't really put me off of Quinton because of why he was so dependent on drugs. Both Nova and Quinton have experienced serious loss in their lives and don't have the support from family and friends that they really need to heal and move on with life. Especially Quinton. That poor guy has a seriously awful life and I just want to hug him and take care of him myself. He feels so good with Nova, but doesn't feel like he ever deserves to be happy again, so he continues to push her away. Nova is so tired of everyone telling her that she's too good for things when she doesn't feel that way anymore at all, which causes her to lash out and make some poor choices because she doesn't know how else to cope with her life. It was so hard to watch Nova go down a bad road in life, but we were on that ride with her and watched her at her best and at her worst. When I say that Jessica Sorenson writes emotional books, I mean EMOTIONAL. We get inside of both Nova and Quinton's heads as the book switches between their perspectives and I think that alternation was detrimental in my connection to this story. If it were only from Nova's perspective, I probably would have hated Quinton. But getting inside of Quinton's head showed me just how damaged he was and how he really did not know any other way to cope with what had happened to him. Nova and Quinton lose people in very tragic ways, and it was people who they really loved, so living life without those loved ones is extremely difficult. If you want a heart wrenching story about two people who are lost and don't know how to love again, you must read Breaking Nova!

Posted by Jessica (Peace Love Books) at 9:26 AM