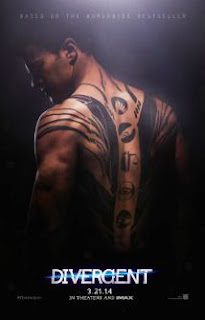 Summary: In a world divided by factions based on virtues, Tris learns she's Divergent and won't fit in. When she discovers a plot to destroy Divergents, Tris and the mysterious Four must find out what makes Divergents dangerous before it's too late.

Review: I have been dying to see this movie pretty much since I heard it was being made into a movie. I was obsessed with Divergent when I read it, so I couldn't way to see it on the big screen.

Tris's world is divided into five factions; everyone knows where they belong. Every year, the 16-year-olds must take a test to tell them the faction where they belong, and are then asked to choose to either stay in the faction they've grown up in, or transfer to a different one. After her test, Beatrice learns that she doesn't belong to any one faction: She's Divergent. That means, though, that she has to choose between staying with her family or choosing the path of who she really is. When she chooses to go Dauntless, Tris uncovers more about the world she lives in and how flawed their "perfect" society really is.

I just have to say this first: I. Love. Theo. James. Honestly, I'm always so worried about who movies are going to cast as the main characters. Four is so perfect and to die for in the book, that whoever they picked to play him in the movie was going to make or break the film. I'm so happy to say that Theo James definitely made this film. I absolutely loved him playing Four and could not get over how perfect he was. Four was such a brooding character and I think Theo captured Four's essence perfectly. He had pretty good chemistry with Shailene Woodley and played the kick-butt, no nonsense hero of the book without a flaw.

I was also worried about Shailene Woodley, because I was not a fan of her at all in The Secret Life of the American Teenager. That show was just awful and she could not act to save her life. Thankfully, though, she's learned a thing or two and actually did a good job playing Tris. She was determined, sassy, and scared at all of the appropriate moments.

I haven't read this book in awhile, but from what I remember, the movie followed the book pretty well. The capture the flag scene was really cool, as well as when Tris and the other transfers first arrived at the Dauntless faction. I thought the movie did a great job bringing Dauntless to life, complete with the jumping on and off the moving trains. I think that Tris's first test could have been more interesting in the beginning of the movie, but as they progressed, the tests became more interesting and how I imagined them in the book. Overall, I thought the movie was really cool and the 2 1/2 hours went by way too fast.

In the end, I loved this movie. I freaked out over how perfect Theo was pretty much the entire movie and loved the action. There wasn't a boring moment and the world Veronica Roth created in her novel truly came alive in this one. If you haven't already, you have to see this movie!