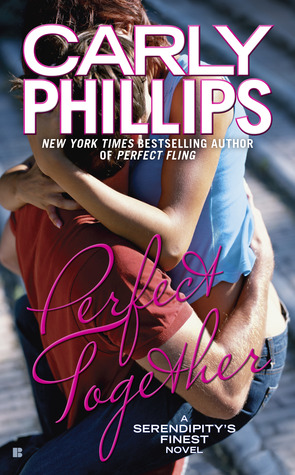 Summary: In the picturesque town of Serendipity, New York, three siblings have grown up in the shadow of their proud and respected police chief father. But what do love, fate, and fortune have in store for the next generation of Serendipity’s finest?
Tired of being the easygoing daughter, always ignored in favor of her high-maintenance sister, and no longer interested in being her fiancé’s trophy wife, Nicole Farnsworth calls off her wedding. All she wants is to be herself. And where better to find her destiny than Serendipity? The place where she met the one man who made her heart beat faster, and gave her the courage to reinvent her life—even if he doesn’t know it.Officer Sam Marsden calls Serendipity home and he loves it there—even though his childhood sweetheart was stolen by his best friend. After such heartbreak, Sam fears he can’t trust his instincts when it comes to love. Yet he’s so tempted by Nicole, a woman he met only briefly but who has starred in his dreams ever since. For Nicole and Sam, opening their hearts one more time could change their lives forever. But who’ll be the first to take that chance?


Review: Normally I absolutely love contemporary romances, but for some reason I just couldn't get into this one. I haven't read the first two books in this series, though, so I think I was missing a major connection with the characters and background information that this book centered around. That'll teach me to not read a book in the middle of a series…
When Nicole Farnsworth takes a step back and really looks at her life, she realizes she's sick of the picture perfect rich girl life she's been leading. So, she decides to break off her engagement with a man she knows she doesn't really love, and move to the small town of Serendipity, a place where a cute detective lives who made her feel things she's never felt before. Sam Marsden knows what it's like to have his heart broken when his fiancé had ran off with his best friend. Now, Sam doesn't know if he can trust a woman again, especially someone like Nicole who seems to have no problem leaving a man behind. But can they deny their attraction despite everything that seems to be pulling them apart? Going in, I thought this would be a fun, cute romance. What I didn't like, though, was how Nicole and Sam had already met in the previous books and felt their immense attraction for each other. In this book, it was about Nicole going back to Sam and finding out what exactly that attraction could lead to. I feel like I missed the whole beginning of their relationship and getting to know them, so I wasn't as connected to their story or relationship. Also, I wasn't that big of a fan of the whole Russian mob side story with Nicole's fiancé's company. I think that was just thrown in for drama and was sort of thrown in. I think it should have been either left out or made a bigger part of the story, not a sort of half in there storyline. I did, though, like how Tyler showed up trying to "win" back Nicole, only to sort of fall for someone else. But, this book was supposed to be about Sam and Nicole. While I think that Sam's family was sweet and I loved how Nicole finally started making friends in Serendipity, I wasn't as invested in their relationship as I wanted to be. Overall, while it had the potential to be a great book, I could not connect with the main couple as much as I wanted to. The story was cute, but I think I would have gotten more out of the book if I had read the first two in this series. If you're a fan of Serendipity's Finest series, you should definitely check this book out. But if you're new to the author and series, start with books one and two before diving into this one.