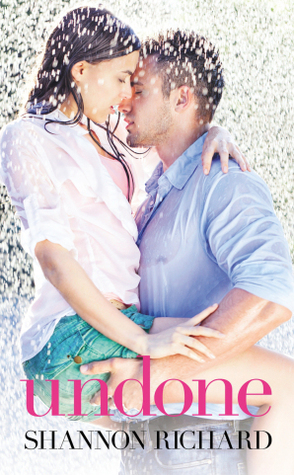 Summary: Things Paige Morrison will never understand about Mirabelle, Florida:
Why wearing red shoes makes a girl a harlotWhy a shop would ever sell something called "buck urine"Why everywhere she goes, she runs into sexy-and infuriating-Brendan KingAfter losing her job, her apartment, and her boyfriend, Paige has no choice but to leave Philadelphia and move in with her retired parents. For an artsy outsider like Paige, finding her place in the tightly knit town isn't easy-until she meets Brendan, the hot mechanic who's interested in much more than Paige's car. In no time at all, Brendan helps Paige find a new job, new friends, and a happiness she wasn't sure she'd ever feel again. With Brendan by her side, Paige finally feels like she can call Mirabelle home. But when a new bombshell drops, will the couple survive, or will their love come undone?

Review: Words can't even begin to describe how much I fell in love with this book. I read the entire book in one day and am dying to get my hands on the next book in the series. How can one couple be so gosh darn cute and absolutely perfect for each other?
Paige Morrison has officially hit rock bottom. Losing her job, apartment, and boyfriend all within a matter of months, Paige finds herself moving in with her parents in the little town of Mirabelle, Florida. Paige is definitely not a small town girl, and the people of Mirabelle aren't afraid to point that out. When her car breaks down, though, Paige might just find the answer she needs to surviving life in the small town: the hot mechanic Brendan who's more than willing to give her a helping hand. With Brendan, Paige finds herself finally finding a place in Mirabelle and picking up the pieces to her broken down life. What Paige doesn't know, though, is that she might just be what Brendan needs to fix his own life too. Seriously. This book. I loved how Brendan was Paige's "hot mechanic" and how there was so much chemistry between Paige and Brendan. The best part, though, was how their relationship grew throughout the book before they finally gave into each other. Brendan proved to Paige that he really wanted to help her out and they partook in some innocent flirting and playful banter as they got to know each other. It seemed like as soon as Paige met Brendan, everything in her life wasn't as bad as she thought it was. I guess the right guy can make everything okay again, and Brendan was definitely that right guy. I mean, a hot mechanic who plays baseball and will pretty much do anything for the woman he loves? Where can I get one?The relationship between Brendan and Paige is so sweet and I loved how they were acting like two teenagers dating, even though they were in their mid-twenties. And the fact that they made fun of themselves for acting so giddy and obsessed with each other was just too cute. There was some serious chemistry between those two, which in the beginning made the happy moments of the story fun and lighter, balancing the darker, more serious moments of the book that came later. Both of the characters grew throughout this book and their relationship was definitely put to the test as life threw various trials their way. I feel like their relationship was so realistic in both how it progresses and has to face the harsh realities of the real world. What more can I possible say about this book? It was perfect. The cover is gorgeous, the couple is adorable, the man is irresistible, and the journey of the relationship is faced with both the good and the bad parts of life. Not only that, but the secondary characters (and canine companions) were all lovable in their own ways and I can't wait to hear their stories in the next books in this series. I knew right away that Jax and Grace were going to be the main couple of the next novel, and I'm dying to read their story. If it's anything like Undone, I know I'm going to absolutely love it.