Book Review: Don't Even Think About It by Sarah Mlynowski

Don't Even Think About It
By Sarah Mlynowski
Release Date: March 11, 2014
Source: Publisher 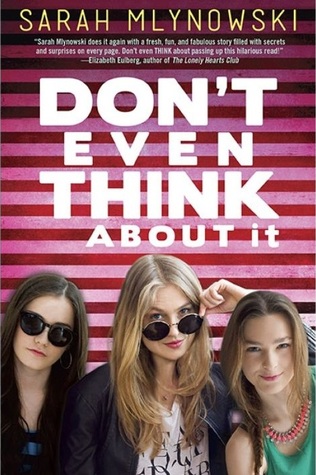 Summary: We weren't always like this. We used to be average New York City high school sophomores. Until our homeroom went for flu shots. We were prepared for some side effects. Maybe a headache. Maybe a sore arm. We definitely didn't expect to get telepathic powers. But suddenly we could hear what everyone was thinking. Our friends. Our parents. Our crushes. Now we all know that Tess is in love with her best friend, Teddy. That Mackenzie cheated on Cooper. That, um, Nurse Carmichael used to be a stripper.
Since we've kept our freakish skill a secret, we can sit next to the class brainiac and ace our tests. We can dump our boyfriends right before they dump us. We know what our friends really think of our jeans, our breath, our new bangs. We always know what's coming. Some of us will thrive. Some of us will crack. None of us will ever be the same.So stop obsessing about your ex. We're always listening.


Review: I absolutely adored Sarah Mlynowski's Ten Things We Did (And Probably Shouldn't Have), so I couldn't wait to get my hands on her newest release. The premise of this one sounded so great too- a group of teens who suddenly have the power to read minds. We all know that's not going to end well…
When 10B homeroom went in to get their flu shots, they thought it was just another normal day. But it wasn't. As more and more of them start to develop telepathic powers, they begin to hear things and secrets about each other they never should have known. And in high school, keeping secrets that aren't yours is pretty hard. The kids of 10B grow closer as their lives go through a crazy whirl wind of discovering things about each other, and the people they thought they knew best. While I was reading this, I was surprised how…simple it was. I don't know if simple is the right word, but this book was such an easy read and flew by. I really enjoyed how different and unique each character was; they reacted and were affected by the vaccine in a different way. Some liked their powers while others hated it. Some used it for good while others used it to cheat on tests or find out others' secrets. You never really know who people are until they're given a power like that. Who's going to be the good guy and who's going to be the bad guy? In the beginning it was a bit difficult to keep all of the characters straight, seeing as 22 of them received the infected vaccine, but once the story moved along you got more familiar with each of them and their stories. I grew to love the individual characters, like Olivia and Tess, as they tried to deal with normal high school things like crushes and shyness. The writing style was definitely unique too. Sometimes it was written in third person, but then would shift to a collective "we" as if they were all narrating the story. I know some people found that annoying when I read their reviews, but I think that made this book more unique and interesting. The kids in 10B really did become a solid unit and bonded together as they had to deal with knowing every little secret about each other and others around them. Overall, this was a really easy, fun read about what life would be like if you could actually read minds. I've always thought it would be cool, but after reading what these guys had to go through, I think I'd definitely go crazy. Who wants to know everyone's secrets and what they really think about you? Yeah, definitely not me! But the ending was fun and I can't wait to see what these guys will face next in the sequel set to release in 2015!
Posted by Jessica (Peace Love Books) at 8:22 AM