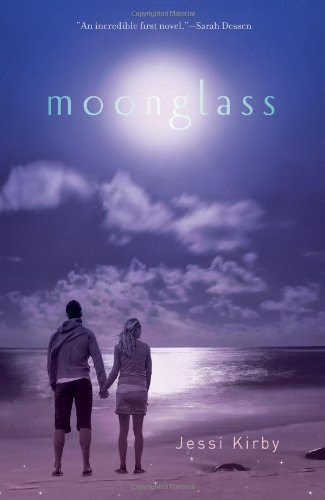 Summary: From Jessi Kirby, a debut novel about confronting the past in order to move ahead.


I read once that water is a symbol for emotions. And for a while now, I've thought maybe my mother drowned in both.

Anna's life is upended when her father accepts a job transfer the summer before her junior year. It's bad enough that she has to leave her friends and her life behind, but her dad is moving them to the beach where her parents first met and fell in love- a place awash in memories that Anna would just as soon leave under the surface.

While life on the beach is pretty great, with ocean views and one adorable lifeguard in particular, there are also family secrets that were buried along the shore years ago. And the ebb and flow of the ocean's tide means that nothing- not the sea glass that she collects on the sand and not the truths behind Anna's mother's death- stays buried forever.

Review: I seriously can't believe this is Jessi Kirby's first novel. It was so good! I was instantly captivated with this book on the first page, where Anna talks about water symbolizes emotions and how her mother was drowned in both. This was before the first chapter even started, so it's not that hard to get into this book. It was so interesting how Anna's mother drowned when Anna was seven, yet it was still a huge thing that Anna and her father couldn't talk about to each other. Even though this book was mostly about that, it still had parts about school, boys, and Anna's life in general so that it was never boring. I liked the part with Anna and Tyler and how their relationship developed. Anna's dad was a pretty cool guy and it was interesting seeing how he disciplined Anna, being extremely angry one minute then laughing about what happened the next minute. The way he acted was a repercussion of Anna's mom death and how they're both now reliving it since they're back where Anna's dad and mom met. The idea of moonglass and seaglass having such sentimental value to Anna was interesting and I could really feel for Anna and cared about what she was going through. I felt the emotions in this book and really liked how Jessi Kirby wrote the story. If this was her first book, I really can't wait to see what else Jessi Kirby can come up with!