I am very honored and excited to announce that today I have an interview with Sullivan Lee, author of Brightwing! Her book was just published last month, so she's here to share a little bit about it!

What three words would you use to describe "Brightwing"?
Sexy-Scary-Swampy!
(Sexy I know you get! Scary in the action/adventure/danger sense, not horror. And Swampy because most of the action takes place in the mystical heart of the Everglades.)
How did you get the idea of a criminal love story?
Before I became a full-time writer I was a deputy sheriff in Florida, so I met a lot of criminals, and though some are certainly as bad as you'd think, plenty of them were pretty good people if you could overlook the fact that they broke into houses and such. Of course, you can't really overlook that in real life, but you can in fiction.
I'd been reading a lot of books with perfect heroines, and after a while they began to get on my nerves. So I wanted to try something different, for the heroine, the hero – all the characters, really. Often the villains are the most fascinating characters, right? Everyone in Brightwing is a villain in one way or another. Once you get used to the new moral sliding scale, though, the best of the villains become the heroes.
I've always been fascinated with morally ambiguous characters, ones who might have a very strong moral sense – just not the same sort most of the rest of us have. It was a challenge to me, coming straight from law enforcement, to let criminals take the lead. I had to make an effort to separate my training from my writing (particularly with the cop-killing sociopath brother, Mallory.)
If you could be one character from your book, who would you be and why?
Lucy Brightwing, of course! She's strong and smart and sexy and tough and (spoiler alert, but you could guess, couldn't you?) gets the man she wants against impossible odds.
Why writing? Have you always loved it or is it something new?
I've been writing, well, ever since I learned how to write! It was the only thing I ever wanted to do, and even though I've had several other careers, through most of them I was writing, editing, submitting, weeping in disappointment after each rejection and then writing something else. I'm a little ashamed to say I gave up for a while. When I became a deputy I stopped writing entirely and devoted myself to my new, exciting, physical lifestyle.
But when I had a baby and left law enforcement I went back to writing and submitting – and that time: success! Now I've sold five traditionally published books under my real name (Laura L. Sullivan) – the middle grade fantasies Under the Green Hill (out now) and Guardian of the Green Hill (out in October) and the young adult historicals Ladies in Waiting (Spring 2012), Delusion (Fall 2012) and an untitled YA book (Spring 2013). With the support of my agent and editors, I decided to self publish my adult work under the not-so-secret pseudonym Sullivan Lee. This is a very exciting time to be an author!
What are your inspirations when you write? When you get stuck, what do you do?
Oh, everything inspires me! I'm like a hunter-gatherer of ideas, picking up this and pouncing on that as I go through life. I steal (borrow?) from the news and history and other books and TV and friends. Writers never stop working on their books – everything is research and inspiration.
I never have writer's block, but I do tend to tie my plots into knots I can't unravel. Sometimes I use the Gordian Knot solution, but when I need something more subtle I think about it as I'm falling asleep. Then I use any idea that was good enough for me to remember when I wake up the next morning.
What do you do when you're not writing?
Right now, almost nothing! I have so many projects going that, when I take into account my publicity efforts, there's not much time left. When I do have time I devote it to my four year old son, Robert. So I spend many hours with glue and safety scissors, Hot Wheels and Chuggington trains, and reenacting scenes from Spongebob. When I have free time alone, I read (of course), swim, hike, fossil-hunt, and lie in the hammock thinking I really should be gardening.
What is your favorite book/author and why?
Favorite questions are so hard for me! I love Jane Austen, who everyone has read, and Anthony Trollope, who no one has read. (He's a Victorian who wrote 47 novels of perhaps 3-400,000 words each, which alone should be an inspiration to authors. Brilliantly insightful novels, with romances at their core, but always delving into politics and social mores and religion and money. And they're frequently very funny, too.)
And Eva Ibbotson, both for her funny middle grade books and her deliciously clever YA/adult romances. And J.K. Rowling. And Kathleen Windsor (mostly for Forever Amber, my favorite romance ever.) And about a hundred others!
What's next?
Besides the books I have coming out as Laura L. Sullivan, I'm working on another book for my Sullivan Lee line. I don't want to reveal too much, because it is hard for me to talk about a work-in-progress (I firmly believe in the jinx!) but it will be called FLESH, the first in a series, a romantic thriller that features a female deputy sheriff who teams with a criminal (of sorts) to solve a chilling murder. Oh, plus a paranormal element!
Then I'd love to write a sequel to Brightwing (I have a rough outline and a title already: SWAMP BORDELLO) and then maybe combine my two writing styles for an edgy YA.
Thank you so much for having me on Peace Love Books!
Thank you so much for being here today! To learn more about Sullivan Lee (aka Laura Sullivan), then you can check out her blog!
***Giveaway***
Brightwing by Sullivan Lee 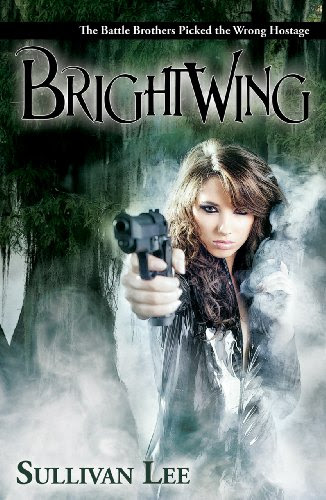 Summary: Edgar and Mallory Battle are on the run after a spectacularly violent escape. Now, with a trail of bodies behind them, they need a hostage against the inevitable standoff with the police. Their first doesn't last long, thanks to sociopathic Mallory. Edgar has been hiding his brother's crimes since they were kids. Now he's torn between family loyalty and self-preservation.

They carjack Lucy Brightwing, a criminal fresh from her own heist, with a fortune of uncut gems hidden in her vehicle. She could escape - but she won't abandon her millions. She could kill the Battle brothers, but she has to be careful. For one thing, if the law investigates, they'll find her ill-gotten loot. For another, her own life is sacred. She's the last member of a Florida paleoindian tribe thought to be extinct - the Tequesta. With her share of the money she plans to buy, bribe and blackmail her way into her own ancestral tribal lands in the heart of the Everglades: a Tequesta nation.

Lucy leads the brothers into her beloved swamp, determined to kill them. But when she falls for Edgar she must decide whether to risk her heritage and the future of her tribe to save the doomed brothers.

Sullivan Lee has graciously offered an e-copy of her novel Brightwing! Thanks so much for this giveaway!
To enter:
-Post a comment on this interview with your email
-You do not need to be a follower, but it would be greatly
appreciated if you were!
-1 winner will be randomly chosen and announced on August 9th
-The winner have 48 hours to reply before a new winner is chosen