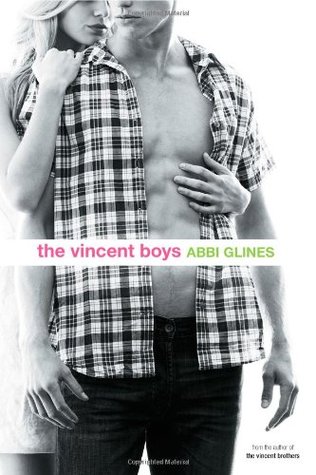 Ashton is getting tired of being good, of impressing her parents and playing ideal girlfriend to Sawyer Vincent. Sawyer is perfect, a regular Prince Charming, but when he leaves town for the summer, it’s his cousin Beau who catches Ashton’s eye. Beau is the sexiest guy she’s ever seen, and even though he’s dangerous, Ashton is drawn to him.
Beau loves his cousin like a brother, so the last thing he wants to do is make a move on Sawyer’s girl. Ashton is off-limits, absolutely. That’s why he does his best to keep his distance, even though he’s been in love with her forever. When Ashton wants to rekindle their childhood friendship in Sawyer’s absence, Beau knows he should say no.
Ashton and Beau don’t want to hurt Sawyer. But the more they try to stay away from each other, the more intense their urges become. It’s getting way too hard to resist….

Ever since I met Abbi Glines two years ago, I have been dying to read her Vincent Boys series. I have heard nothing but great things about her romances, so I couldn't wait to see for myself!Ashton has spent the past four years trying to be the perfect person for her boyfriend Sawyer. But being perfect has been tiring, so when Sawyer leaves for the summer and his bad boy cousin Beau starts hanging around, Ashton feels relieved to finally show her flaws to someone. Ashton and Beau were inseparable when they were younger and Beau hasn't stopped thinking about her since then. But Sawyer is like a brother to him, but the more time he spends with Ashton, the harder it is to stay away from the girl he knows is meant to be with him. Oh wow, this book. I was not ready for how irresistible Beau was going to be. We all know the typical bad boy character, but Beau is so much more than that. I loved how Beau really did care about his friendship with Sawyer and how much he tried to stay away from Ashton. I absolutely love and hate the books that have a really really really good reason for the main couple not to be together. You want them to be together so badly but then again you know that they really shouldn't be together. Darn you authors who put your readers' hearts through the wringer! While I loved the characters and the intense chemistry in this book, I did have a few minor problems with this book. The first was that I felt like we were already biased against Sawyer from the start. The book jumps right into Ashton being alone for the summer and growing closer to Beau. We never really get to see Ashton and Sawyer as a couple, but instead we just hear about how perfect he is and how Ashton has to pretend to be perfect and never be herself. Also, there is one moment between Ashton and Beau that I felt should have meant so much more to Ashton than she really lets on. Maybe it was just me, but I think it should have been a bigger deal than it was. The little problems aside, I still really enjoyed this book and the romance Abbi Glines created. I loved how much chemistry and attraction there was between our two main characters and how much emotion there was between them. I was definitely invested in their relationship and can't wait to read the second book in this series!