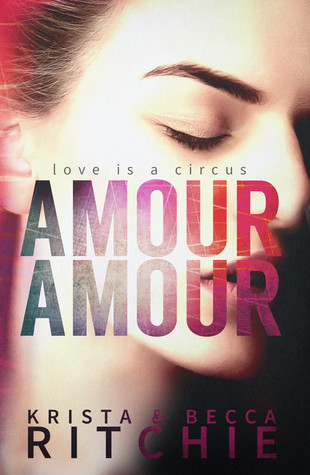 The best aerial technique won’t land 21-year-old Thora James her dream role in Amour—a sexy new acrobatic show on the Vegas strip. Thora knows she’s out of her element the second she meets Amour’s leading performer. Confident, charming and devilishly captivating, 26-year-old Nikolai Kotova lives up to his nickname as the “God of Russia.”
When Thora unknowingly walks into the crosshairs of Nikolai’s after-show, her audition process begins way too soon. Unprofessional. That’s what Nik calls their “non-existent” relationship. It’s not like Thora can avoid him. For one, they may be partners in the future—acrobatic partners, that is. But getting closer to Nik means diving deeper into sin city and into his dizzying world.
Thora wants to perform with him, but when someone like Nikolai attracts the spotlight wherever he goes—Thora fears that she’s destined to be just background to his spellbinding show.

I fell in love with Krista and Becca's ability to write an addicting romance in Addicted to You, so when Amour Amour was on sale for 99 cents on Amazon, I couldn't resist. I had no idea what the book was about, but I knew I couldn't wait to read another book by them. 21-year-old Thora James is tired of doing something she doesn't love, so she's taking the risk of her life and going to Las Vegas and trying out for an acrobatic show. Her first night there, she meets the mesmerizing Nikolai Kotova, a russian devil of a man, and finds herself losing a bet to him where a piercing is the punishment of choice. The next day, though, Thora has to get down to business and focus on her tryouts for the acrobatic shows. The last person Thora expects to see there is Nikolai. There is an undeniable chemistry between Nikolai and Thora, but can they keep it professional while Thora tries to face her fears of putting herself out there and finally doing something with her life worth living for? Holy moly, from the first page of this book I was hooked. First of all, Thora attended Ohio State, which is literally where I grew up and lived my entire life (Go Bucks!), so I loved that Thora was from Ohio. Second, Nikolai. Can we leave it at that? Seriously, there is a reason the man is nicknamed the God of Russia because he is this intoxicating, dominating presence that you just don't want to leave. I loved the moment he and Thora met and I couldn't wait to watch them fall for each other. And the fact that he happened to be the person Thora was trying out to partner with just made it that much better. While Nikolai looked like a God on the outside, it was so intense how much Thora got to see of his personal life. Nikolai's family is such an integral part of this book and I loved being able to meet them and watch them interact with Nikolai. There was a whole other side to him that Thora didn't know when she first met him and it added so much dimension to Nikolai's character. I absolutely loved his sister and his brothers were a hoot. Thora became just as important to Nikolai and his ability to cope with his own life as Nikolai was to Thora. I am happy to report that this is another addicting, sexy, and irresistible book from Krista and Becca Ritchie. The romance was intense from the start and only built from there. I could not stop reading this book and didn't want to leave Thora and Nikolai for a second. Did I mention how much I loved the fact that the main characters were acrobats? That's definitely a first for me! If you haven't yet read anything from the Ritchie twins, you must pick up Amour Amour! You won't regret it!