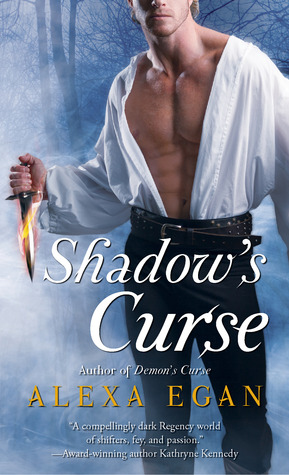 Summary: The second novel in the dark and sexy Imnada Brotherhood trilogy featuring shape-shifters in Regency-era England.
Suffering under a horrible curse and renounced by his clan, the Imnada shape-shifter, David St. Leger, stalks the London nights in the form of a large black wolf, channeling his desperate rage on thieves and murderers. But when he’s captured by the very woman he sought to rescue, he’s thrown into the magical and dangerous world of the Other—half human, half-Fey, and one of the Imnada’s ancient enemies.Forced by her half-brother to use her gift of necromancy as a money-making scheme, Callista Hawthorne wants only to flee to her aunt in Scotland where she’ll be safe. Considering David her last hope, she offers him a deal—freedom in exchange for his protection on the long journey north.Now in a race for their lives, Other and Imnada must put aside centuries of animosity and work together if they are to overcome the dark forces intent on stopping them before they reach safety. For Callista is far more powerful than she knows, and with her help and her love, David may finally be able to break the curse of the Imnada…

Review: Historical paranormal romance is definitely not a genre I delve into very often, but Alexa Egan sure knows how to write great novels in that genre! I really enjoyed her first book Demon's Curse and her newest release was even better!
Living with a horrible curse as an outcast from the Imnada, David St.Leger spends his time stalking the night in wolf form, helping innocent people who fall pray to the thieves and murderers of London. When he stumbles across Callista, a necromancer trying to run away from the evil man her brother has betrothed her to, he doesn't receive the usual thanks. Instead, David finds himself captured by the men controlling Callista. Callista will do anything to escape, though, and promises to help David escape if he brings her to her Aunt in Scotland where she can finally be free. Can Callista and David make it to Scotland without being captured by the men so desperate to catch them? And will Scotland really hold all of the answers they both seek?The best thing about this genre is that it has a little bit of everything. There's romance with Callista and David, paranormal with the whole necromancer and shapeshifter aspect, and it's historical because it takes place in Regency-Era England. With all of these fantastic elements, Shadow's Curse was a very intriguing read with a thrilling story full of action and romance. While Callista was a likable enough character, her whole damsel in distress, naive personality was a bit annoying in the beginning, Once she becomes more independent as the novel goes on, though, she becomes more likable, especially as she warms up to David. David's character was great and I loved how he was really a good guy on the inside, despite how dangerous and deceiving he appears on the outside. And we get a visit from the main characters of the first book in the series, so we got to see how their lives were going after the first novel ended. Though this is a romance, a lot of the story was focused on Callista and David running away from bad guys. And there were A LOT of bad guys. The chase kept you on your toes and you had no idea what obstacle would be thrown into Callista's path next. Then, the whole mystery behind Callista's powers was very interesting because she was very powerful, but only knew how to do the basic necromancy since her mother died before she learned the rest. Overall, Shadow's Curse was a really enjoyable book. While the characters weren't my favorite right away, I ended up enjoying the story as it went along and we discovered more about the secrets behind the magic lives of the characters. If you haven't tried a historical paranormal romance yet, I'd definitely recommend starting out with Alexa Egan's Imnada Brotherhood series!