Book Review: Season of the Witch by Mariah Fredericks 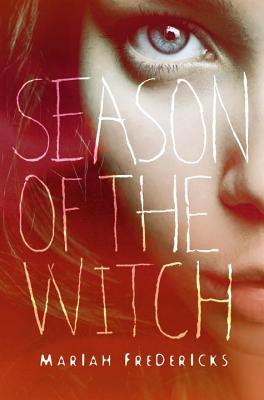 Summary: Like Fredericks's The Girl in the Park, here is a page-turner that perfectly captures the world of New York City private schools, as it explores the notion of power among teenage girls. Publisher's Weekly, in a starred review, raves, "Fredericks again proves her gift for conveying the intensity of adolescence, while exploring the ways girls’ sexuality is used against them and asking why 'we all have to be predators and prey.'"
Queen Bee Chloe is going to make Toni suffer for whatever transpired between Toni and Chloe's boyfriend, Oliver, over the summer. From day one of eleventh grade, she has Toni branded as a super slut, and it isn't long before things get so ugly that Toni fears for her safety. What's a scared, powerless, and fed-up teenager to do? Guided by Cassandra—a girl with some serious problems of her own—Toni decides to stop playing the victim and take control. Cassandra has been experimenting with witchcraft, and together they cast a spell on Chloe that may actually cause her death. Could Toni have really made such an awful thing happen?


Review: When I got this book in the mail and looked at the cover, I thought it would be a paranormal novel about witches. After reading it, I'm still not sure if there was actual true witchcraft or not, but I definitely got a much more contemporary YA book about high school girls and how far bullies will go to show exactly who is on top at their school.
If there's one thing Toni has learned after summer, it's that people love drama and love taking sides. When Toni had a thing with Queen Bee Chloe's boyfriend (when they were on a break) over summer, she had no idea how far Chloe would go to ruin her life when she figured it out. Now, everyone thinks Toni's a slut and Chloe will do whatever she can to make Toni's life a living hell. Toni has no idea how to handle Chloe and she's scared of how far Chloe will takes things. So when she meets Cassandra, the strange girl whose little brother died that summer, Chloe is shown a dark, magical world where she's no longer the victim. Toni is determined to get revenge on those who have wronged her, but Toni soon realizes just how dangerous witchcraft can be, and just how crazy Cassandra really is. I've got to say, I really really hate bullying. As a future teacher, I can't stand the idea of people being so mean for absolutely petty reasons. Chloe and her friends were sending threatening messages to Toni before school even started, and Toni had so much fear and anxiety before even entering the school on the first day back. Yeah, Toni messed around with Chloe's boyfriend, but they weren't even together when it happened. This book showed just how evil girls can be, and what their bullying can drive people to do. Toni is definitely an interesting character. She goes through such a roller coaster of emotions and doesn't know how to deal with everything going on in her life. Her parents are dealing with her dad cheating on her mom, so Toni knows she can't go to them for help. Then, her best friend Ella is dealing with her parents obsessing over her weight and her cousin's death (Cassandra's little brother). High school is such a complex, emotional time and Toni turns to her last hope to deal with everything: Cassandra's strange witchcraft. Like I said at the beginning, I don't even know if this witchcraft is real or if everything that happened was just a coincidence. Either way, the magic used was really creepy and had you on the edge of your seat just anticipating what would happen after Toni and Cassandra cast their "spells." While it was a little slow at times, I really enjoyed this one and how far it delved into high school life. If you want a contemporary novel with a bit of wickedness and creepy coincidences thrown in, I'd recommend you pick up Season of the Witch.