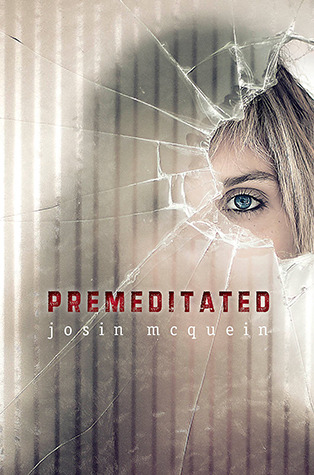 Summary: A week ago, Dinah’s cousin Claire cut her wrists.
Five days ago, Dinah found Claire’s diary and discovered why.Three days ago, Dinah stopped crying and came up with a plan.Two days ago, she ditched her piercings and bleached the black dye from her hair.Yesterday, knee socks and uniform plaid became a predator’s camouflage.Today, she’ll find the boy who broke Claire.By tomorrow, he’ll wish he were dead.


Review: First of all, can we stop and take a moment to admire that awesome cover? As soon as I opened up the package and looked at the cover of this one, I couldn't wait to see what story it held inside…
When Dinah's cousin Claire attempts suicide by cutting herself and winds up in the hospital after hitting her head on the sink, Dinah is devastated. They are best friends, but Dinah was forced to move with her parents and away from Claire. When Dinah finds Claire's diary, she learns the reason behind Claire's cutting: Brooks Walden. Dinah's determined to find the boy who broke Claire's heart and ruined her life, and give him a taste of his own medicine. This book has such a cool premise. It definitely had a Heathers vibe (which I actually recently watched about a month ago), especially when I wasn't sure if Dinah literally wanted to kill Brooks or not. Being inside of Dinah's head really had you on her side and rooting for her to take down the guy who took advantage of a 14-year-old girl and threw her away like trash. There were serious emotions and motivations in this book, and that just made Dinah's drive for revenge that much stronger. What I really liked about this book was how Dinah entered into Claire's rich world and was sort of undercover in trying to take down Brooks. You really don't know what secrets everyone is hiding and who you can really trust. Not to mention, Brooks doesn't seem at all like Claire's diary describes him to be. These people have so many issues with their own relationships that you really don't know who's truth is actually true. While this book was definitely an intriguing ride and very emotional, some things were a bit predictable for my taste. I did, though, like how Dinah did kind of go all Veronica Mars in going "undercover" and how she had her two best friends from her old life there helping her out. Her best friends were definitely a riot and made some of the serious parts a bit lighter. Overall, this was a really good read with a unique plot line. While it didn't blow me away, I had fun reading it and would recommend that, if you had the time, you should go check it out. There's mystery, revenge, and even a little bit of romance thrown in there. Oh, and a ton of emotional situations, seeing as Dinah's cousin is in the hospital fighting for her life after a suicide attempt and her mother has some serious parental issues of her own. All of the characters had a lot of depth to them, even the ones who seemed shallow in the beginning, and Dinah gets a whole lot more than she ever bargained for on her quest for revenge. So if you get the chance and are in the mood for something different, I'd recommend picking up a copy of this one.