Book Review: How I Live Now by Meg Rosoff 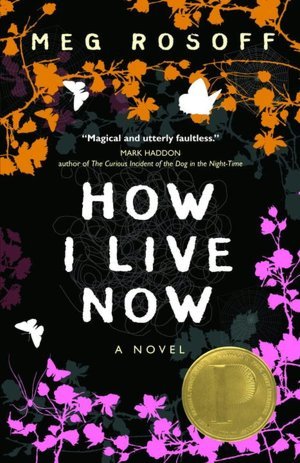 Summary: “Every war has turning points and every person too.”
Fifteen-year-old Daisy is sent from Manhattan to England to visit her aunt and cousins she’s never met: three boys near her age, and their little sister. Her aunt goes away on business soon after Daisy arrives. The next day bombs go off as London is attacked and occupied by an unnamed enemy.As power fails, and systems fail, the farm becomes more isolated. Despite the war, it’s a kind of Eden, with no adults in charge and no rules, a place where Daisy’s uncanny bond with her cousins grows into something rare and extraordinary. But the war is everywhere, and Daisy and her cousins must lead each other into a world that is unknown in the scariest, most elemental way.A riveting and astonishing story.


Review: I had never heard of this book before I was asked to review it, so I was surprised to see that it's been out since 2004 and has won a Pulitzer Prize. Where have I been? So I decided I definitely had to give this one a shot.
At home, Daisy is having a hard time dealing with her dad's remarriage and new baby that's on it's way, so her dad decides to send her to England to live with her Aunt and cousins she's never met. Daisy starts to really like it in England and living with her cousins. Soon, though, her Aunt leaves to go on a business trip, and the next day London is bombed and taken over by an enemy, turning their whole lives upside down. With war raging, Daisy and her cousins find themselves depending on each other to survive and reunite with their family. I had absolutely no idea what was going on when I started this book. For some reason, the idea that this is a dystopian book completely escaped me, so the whole war/occupation just came out of nowhere. Was this WWII? But how did they have cell phones and internet? Once I realized that this was a make believe situation, everything made A LOT more sense. While I think being inside of Daisy's head was really cool and the way the story was portrayed was so real, it seemed a bit too juvenile for a 15-year-old. When it started, I thought Daisy was 11 or 12, but apparently she was 15. I think a 15-year-old would have been a bit more mature in her thoughts, but I guess the naivety of her mind was necessary to create the kind of idea that she was an innocent girl caught in a dangerous war. The emotions of this book definitely saved it for me. Daisy is such a complex character in what she feels, and going through a war where she experiences death and danger is really hard for such a young girl to deal with. I really liked her relationship with all of her cousins, and how broken her relationship with anyone at home was. Being inside of her mind, you were able to become just as attached to all of the other characters of the book as Daisy did. In the end, I had really mixed feelings over this one. It was definitely unlike everything I've ever read, but it had some aspects that I wasn't a big fan of. Just keep in mind, this is dystopian and the war that's going on didn't really happen. Once you know that, this book makes a lot more sense and you can focus on the emotional roller coaster the characters are forced to embark on.