Book Review: The Unlikely Hero of Room 13B by Teresa Toten

The Unlikely Hero of Room 13B
By Teresa Toten
Release Date: 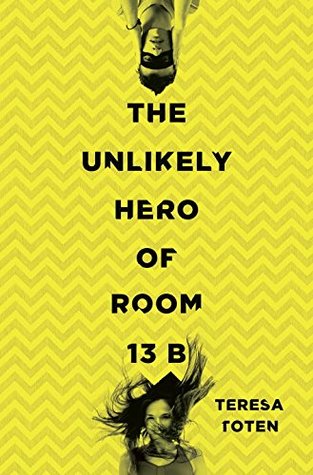 Summary: Adam Spencer Ross is almost fifteen, and he’s got his hands full confronting the problems that come with having divorced parents and new stepsiblings. Add to that his obsessive-compulsive disorder and it’s just about impossible for him to imagine ever falling in love. Adam’s life changes, however, the instant he meets Robyn Plummer: he is hopelessly, desperately drawn to her. But is it possible to have a normal relationship when your life is anything but?
Filled with moments of deep emotion and unexpected humor, The Unlikely Hero of Room 13B explores the complexities of living with OCD and offers the prospect of hope, happiness, and healing.


Review: When this book first arrived in the mail for me, I instantly knew that I was going to read it. With a cover like that, how could I not? When I saw that the book was about a boy with OCD falling in love, I couldn't wait to see what story it held inside.
Adam Spencer Ross is a 15-year-old with OCD. With his increasing compulsive behaviors, his divorced parents, and a massive crush on a new girl in support group, Adam has his hands pretty full. But he feels the need to take care of everyone, even when he's the one who may need help the most. As Adam starts to fall harder for Robyn, he's not sure if he can be a part of something so normal when his life is falling to pieces around him…I love books with lovable characters and, let me tell you, the characters in this book are definitely lovable. From the beginning, they all assign themselves personas in their support group and most of them choose superhero, so they go by those names for the rest of the novel. As Batman, Adam definitely takes on the role as the person there to save everyone else. Especially when it comes to Robyn, who Adam has fallen head over heels in love with. At first I wasn't sure if it was going to be a realistic crush or an obsessive, ideal crush, but Adam legitimately develops a relationship with Robyn that I became so emotionally involved in that I was rooting for the both of them the entire time. With so much of the book happening at support group or with Adam dealing with his little brother or his mom who is a hoarder, this book deals with a lot of serious mental and emotional issues. I just wanted to hug Adam for the amazing things he did for others when his own problems were slowly escalating and driving him crazy. He deserves so much happiness that it was heart-wrenching when things constantly stood in his way. I'm always interested in books that deal with topics I'm not too familiar with. In this case, I knew a little about OCD, but I had no idea how much it can take over a person's life. Adam had compulsions he had no way of controlling and it was incredibly sad how much he wished he didn't have those compulsions. At times, it took him over 20 minutes just to walk inside of a building because he had to have a certain routine to walk through the threshold. Compulsions are completely out of a person's control and you really get to see that through Adam's character and his interactions with the other characters. I wish we could have seen him interact with people at school and how people treat him who don't have a disorder as well. We pretty much never got to see him at school, but I still loved the moments we got of him at his support group and the one-on-one sessions with the leader of his support group. Overall, this book delves into the life of someone with OCD who is dealing with falling in love and trying to live life like a normal teenager. From the first page, you fall in love with Adam and everything he does just pulls on the heartstrings. I flew through this book and already miss all of the characters who became such an integral part in Adam's life. Yes, even you Thor! If you're interested in books that deal with mental illness and has relatable and lovable characters, you should definitely pick up The Unlikely Hero of Room 13B.