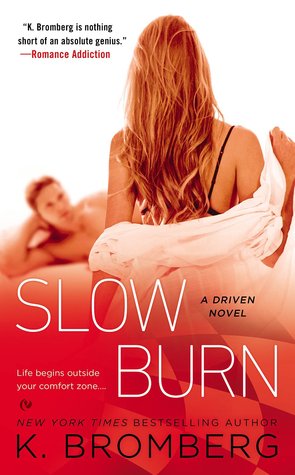 Summary: One Night. That's all it was supposed to be.
Reeling from the sudden loss of her sister, Haddie Montgomery has sworn off relationships. All she wanted from Beckett Daniels was a sexy distraction to help her escape her pain for just a little while....There weren’t supposed to be any strings attached—so why can’t she shake the memory of that unforgettable night from her thoughts? Or the taste of his kiss from her lips?No matter how hard Haddie tries to forget about him, Becks relentlessly tries to prove that she should start living for today. But she is determined to avoid romantic commitment, and she can always use her ex-boyfriend’s reappearance to help snuff out the slow burn within her that Becks has sparked....Or will fate force her to realize that this kind of connection doesn’t come along very often and a chance at love is worth the risk?

Review: While this is the fifth book in the Driven series by K Bromberg, I actually haven't heard of these books until I was sent this one for review. But who am I to resist a romance that promises passion, emotions, and a burning desire that's impossible to resist?
Still dealing with the pain from losing her sister, Haddie Montgomery can only find solace in losing herself in men. Her one rule, though, is that they're all no strings attached. But when she has a one night stand with Beckett Daniels, she finds it hard to follow her rule, especially when he's so determined to be a part of her life. Haddie knows that she can't put her heart into any kind of commitment when it's still so raw from losing her sister, so when a potential crisis in her future pops up, Haddie is determined to push Becks away. But Becks isn't the kind of person to give up without a fight and Haddie soon finds herself losing the battle to an irresistibly gorgeous man…Wow, I was definitely not expecting so much emotion in this book. But let's start at the beginning. Maybe it's because this is the fifth book and I haven't read the other four, but I felt like we were just dumped into the story and weren't properly introduced to the characters. One second we're at a wedding and the next Becks and Haddie are all over each other. Wait, who are these people? What's going on with them? Again, this may have been my fault for jumping into a series five books in, but I would have liked more of an introduction. Once I was into the story, though, I definitely got to know our two main characters. Haddie is dealing with very raw emotions over losing her sister to breast cancer and worrying about the possibility that she may develop the very same cancer. No wonder she is so scared to let herself fall for Becks! And Becks is such a good guy that it just broke my heart every time he was crushed by Haddie and her need to push away anyone who may care for her. When I say that this book was emotional, I mean it was EMOTIONAL. Any book that deals with cancer and losing a sibling/family member is already a tough read, but Haddie is so completely torn up over it and just doesn't know how to cope with her own feelings about it. I was so captivated by the raw emotion between her and Becks whenever Becks tried to call her out on her fear and refusal to heal after such a loss. While I wasn't a big fan of the constantly crude dialogue between the characters, I did feel their connections and importance to one another. There was a huge support system in this novel and I loved how involved all of the characters were in each other's lives. Overall, this is a book that has a sexy man and a stubborn women that go through an emotional roller coaster of a relationship. I definitely want to pick up the previous books of this series to meet the other gorgeous men and how they tamed the strong women that appear in this novel. If you like compelling characters, heat that sears through the pages, and intense emotion, you most definitely have to check out K Bromberg!

Posted by Jessica (Peace Love Books) at 6:38 AM