Book Review: The Stories We Tell by Patti Callahan Henry 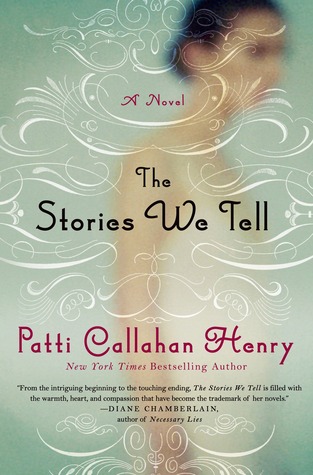 Summary: Eve and Cooper Morrison are Savannah’s power couple. They’re on every artistic board and deeply involved in the community. She owns and operates a letterpress studio specializing in the handmade; he runs a digital magazine featuring all things southern gentlemen. The perfect juxtaposition of the old and the new, Eve and Cooper are the beautiful people. The lucky ones. And they have the wealth and name that comes from being part of an old Georgia family. But things may not be as good as they seem. Eve’s sister, Willa, is staying with the family until she gets "back on her feet." Their daughter, Gwen, is all adolescent rebellion. And Cooper thinks Eve works too much. Still, the Morrison marriage is strong. After twenty-one years together, Eve and Cooper know each other. They count on each other. They know what to expect. But when Cooper and Willa are involved in a car accident, the questions surrounding the event bring the family close to breaking point. Sifting between the stories—what Cooper says, what Willa remembers, what the evidence indicates—Eve has to find out what really happened. And what she’s going to do about it.A riveting story about the power of truth, The Stories we Tell will open your eyes and rearrange your heart.

Review: Since I can't get enough romance when it comes to reading, I very rarely read pure fiction books that aren't solely focused around two people falling in love. That being said, The Stories We Tell was a breath of fresh air that revolves around a woman trying to understand a tragedy that falls upon her family while trying to figure out her place in her own family.
Eve has been living the perfect life with the perfect husband, Cooper Morrison. While Eve owns her own printing company, Cooper runs his successful online magazine that reflects their perfect Southern life. But when Eve's sister Willa and Cooper are in a car accident leaving Willa with no recollection of that night, everything Eve knew about her family has crumbled to pieces. Eve has always thought she could count on Cooper, but the crash brings up many questions, leaving Eve doubting if she can trust Cooper anymore and if her perfect family has ever been perfect at all. Right away, we're thrown into Eve's mind and follow her along her troubling and confusing journey of uncovering who her family really is. With the accident, it's so hard to understand what really happened when none of the stories that Cooper tells or Willa tries to remember make sense. Should Eve continue to be the loving, doting wife and blindly trust her husband, yet again? Eve has to make some serious decisions, all while trying to keep her family together and trying to understand her rebellious teenage daughter. All of the characters in this novel were well fleshed out and developed, so I was able to really understand all of them and what they were going through. I really loved Willa and Gwen and how troubled, yet free-sprited they were. I could see why they loved hanging out with each other because they were both misunderstood and didn't really know how they fit in with their family or the world in general. Especially Willa. There was the whole element of mystery as to whether Willa or Cooper were telling the truth, or neither of them. Since the book was from Eve's point of view, we were in the same state of confusion as she was, so we really didn't know what actually happened the night of the accident until the missing pieces of both Cooper and Willa's stories finally come together at the end. Overall, I enjoyed this fiction novel that explored Eve's various relationships and tested her "perfect" family, showing it's true structure beneath their happy, successful facade. Oh, and I loved the references to The Fault In Our Stars and Friday Night Lights! Those were nice little tidbits to add some relief during the serious, troubling times of Eve's life. While the story wasn't super exciting and suspenseful, there is a very realistic element of family and how tragedy and secrets can put a strain on every relationship in the family. The Stories We Tell offers a life where the truth is never known and families are tested in where their loyalties really lie.