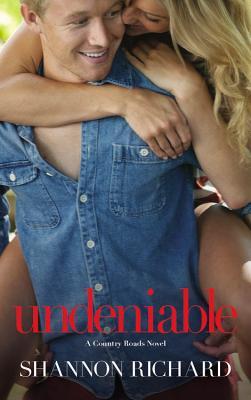 Summary: THEIR LOVE WAS UNDENIABLE
Grace King knows two things for certain: she loves working at her grandmother's café and she loves the hunky town sheriff. She always has. As she bakes him sweet treats, Grace fantasizes about helping him work up an appetite all night long. But whenever she thinks she's finally getting somewhere, he whips out some excuse to escape. Growing up, he never looked twice at her. Now Grace won't rest until she has Jax's undivided attention.Jaxson Anderson can't deny that his best friend's kid sister is the sexiest woman in Mirabelle, Florida. Unwilling to burden Grace with his painful past, Jax keeps the sassy blonde at arm's length. Yet one heated kiss crumbles all of his carefully built defenses. But when a town secret surfaces, threatening to destroy everything they believe in, can the man who defended Grace from bullies as a child protect her now?

Review: I fell in love with Shannon Richard's first novel Undone and have been dying to get my hands on another one of her novels. With such a sweet romance and lovable characters, I could not stop reading. So when Undeniable was finally released in paperback, I knew I had to get my hands on it!
Grace has been in love with Jax for as long as she can remember. But at 24-years-old, Grace still has not revealed her feelings, and every relationship she's ever been in could never live up to her feelings for Jax. And what makes it worse is that Jax is always around as someone Grace can never have. As the town sherif, Jax constantly stops by the cafe Grace works in and has been protecting Grace ever since she was a kid. Recently, though, Jax has been seeing Grace as more than his best friend's kid sister. But can Grace handle his scared past and show him that he really can be loved? I shouldn't be surprised, but I absolutely loved this book. Seriously. We got to see the sexual tension between Grace and Jax in Undone, but that doesn't even begin to compare to the passion and chemistry they have in this book. The minute we met Grace, I was instantly connected to her and how hopelessly in love with Jax she was. Grace is such a sweet girl and uses baking as a way to relieve her stress, which only made her even more endearing. Grace's adorable personality made it very clear why she was the only one who can make the serious Jax crack a smile. With such a strong history between those two, the moment they finally got together made the experience that much more powerful. I absolutely loved Jax and how protective he was of Grace. From the very first page, Jax has been protecting Grace from the evils of the world, whether they were bullies on the playground or life-threatening situations. No matter how strongly he felt for her, though, Jax had some serious issues with his family and had a hard time letting people in, especially Grace. He'd grown up thinking he could never be good enough, so he thought Grace can do so much better than him. My heart ached every time Jax would put himself down just because other people put him down, because he was so much more than that. Jax was so strong and what girl wouldn't want a hunky sherif protecting her every minute of the day? Not only was the romance passionate, but there was also a little mystery behind who was breaking into businesses around town and threading the safety of the residents of the town. Jax and Grace definitely go through a roller coaster of emotions and things only get even more intense when danger crosses their path. I would definitely recommend Shannon's Country Roads series to any contemporary romance fans who has a soft spot for small town romances. While I'm sad that we won't be getting Shep's story in the next novel, I can't wait to get even more of this small town romance with characters who have completely stolen my heart.