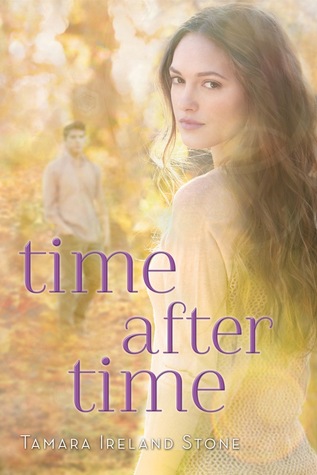 Summary: Calling Anna and Bennett’s romance long distance is an understatement: she’s from 1995 Chicago and he’s a time traveler from 2012 San Francisco. The two of them never should have met, but they did. They fell in love, even though they knew they shouldn't. And they found a way to stay together, against all odds.
It’s not a perfect arrangement, though, with Bennett unable to stay in the past for more than brief visits, skipping out on big chunks of his present in order to be with Anna in hers. They each are confident that they’ll find a way to make things work...until Bennett witnesses a single event he never should have seen (and certainly never expected to). Will the decisions he makes from that point on cement a future he doesn't want?Told from Bennett’s point of view, Time After Time will satisfy readers looking for a fresh, exciting, and beautifully-written love story, both those who are eager to find out what’s next for Time Between Us's Anna and Bennett and those discovering their story for the first time.


Review: Seriously? How can not one, but two books be this good? How? I fell in love with Anna and Bennett's story in Time Between Us, so I shouldn't be surprised that I fell even more in love with them in the second book to their story.
Now that Anna and Bennett have fallen for each other, they know they can't deny there's something special about their relationship. Now, more than ever, they're are determined to make it work. But the more Bennett pushes his time traveling abilities, the harder it becomes to travel between 1995 and 2012. After disappearing on Anna the first time and seeing who broken she was without him, he's determined to never let her down again. Playing with time, though, is tricky business and Bennett doesn't know how to accept his role in the world while trying to hold onto the most real relationship he's ever known. Like I said, this book was just…*sigh*. Seriously, I just sigh out of pure joy and contentment every time I think about this series. Anna and Bennett are so perfect for each other, which makes their fight against all of the elements pushing against their being together that much stronger. Bennett still hasn't figured out why time keeps pushing him back to 2012, and he runs into even more problems that put a strain on his relationship with Anna. The best part about this book was, in my opinion, how Anna and Bennett were forced to look towards the future. Was their relationship really worth all of the planning, pain, unpredictability, and heartache? While we had Anna's perspective on their relationship in Time Between Us, we finally get to see things from Bennett's point of view and how truly conflicted and in love he is with Anna. Seriously, why can't we all have a guy as devoted, determined, and loving as Bennett? His emotions are so strong in this book and you can't help but feel everything he's feeling right along with him. By the end, I was so invested in this book and felt like I was a part of the relationship as much as Anna and Bennett were. I know it sounds crazy, but their story sucks you in and really makes you care about them. Ideally, I would have loved to see both Anna and Bennett's perspectives in this one, but Bennett needed his time to shine since Anna had Time Between Us to capture the readers' hearts. Time travel romances may seem like mundane, cliche stories, but Tamara Ireland Stone creates a completely unique, compelling romance between two teens who just want to be together. Every fan of YA romance needs to read the Time Between Us series. You're missing out on one of my new favorite YA authors who is bound to steal the heart of every person who reads her books.

Posted by Jessica (Peace Love Books) at 7:51 AM