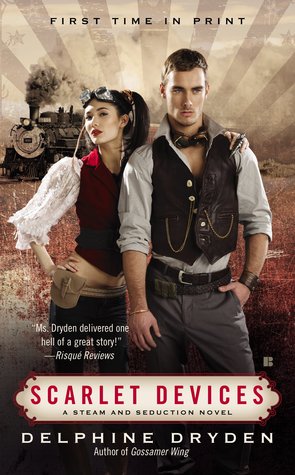 Summary: Fresh from university, Eliza Hardison is determined to crusade for workers’ rights until her cousin Dexter, the Makesmith Baron, prevails on her to represent Hardison House in the American Dominion Sky and Steam Rally.
The competition is fierce, but only one opponent really matters to Eliza. Dexter’s protégé, Matthew Pence, was always like a big brother to her. But now she’s grown up, and Matthew has made a break from Hardison House with his own business venture—and made his own entry in the rally. Matthew intends to win while keeping Eliza safe on the perilous route from New York to San Francisco. As the threats escalate through treacherous skies and uncharted American wilds, though, Eliza and Matthew must work together, discovering a bond deeper than either could have imagined…but is winning the rally more important than winning at love?


Review: For some reason, I almost never read steampunk books. When I do, though, I absolutely love them. One look at the cover of Scarlet Devices, and I knew it was going to be a fun steampunk read with some romance and a lot of attitude.
When Eliza's cousin Dexter asks her to race in the American Dominion Sky and Air Rally, she isn't sure whether she wants to enter or not. Instead, she'd rather continue on in her work for workers' rights. But when her childhood friend Matthew berates Eliza for even thinking of entering, she can't help but want to prove him wrong and enter the race. Matthew is determined to look out for Eliza as someone begins to sabotage the rally as the racers get closer and closer to their destination in San Francisco. Eliza and Matthew are forced to work together to finish the race alive, only to discover some undeniable steam in their own relationship along the way…The very first aspect that drew me to this novel was the steampunk. The characters are driving steam cars and dirigibles in a race representing companies around the world to win the prize money. While Eliza isn't the only woman in the race, there is definitely a lot of repercussion from society when she agrees to enter. Oh, but don't worry, she has the dashing Matthew to protect her along the way. While Eliza was a headstrong woman who knew her way around a steam car, Matthew provided the perfect companion to bicker and stir up trouble with. The pair of them were so entertaining and I loved the instant chemistry and quirky nature of their relationship. Not only are the steampunk and romance spot on, but the mystery revolving around who is sabotaging the race and what awaits the racers at the end add even more intrigue to the story. Who's killing of the racers? What's in the West that's so dangerous? We don't know! All we know is that Matthew is not going to stand down, and Eliza is determined to stand right by his side. The stubborn nature of the main characters create a story full of twists and turns they must navigate as they quarrel with each other along the way. Even though I didn't read the first book of this series, I was able to immerse myself into the story and fall in love with every single one of the characters and the mechanical world they live in. If you haven't read anything by Delphine Dryden yet, then you must! Her Steam and Seduction series is full of passionate romance and a steampunk world full of gadgets, gears, and intriguing mayhem.