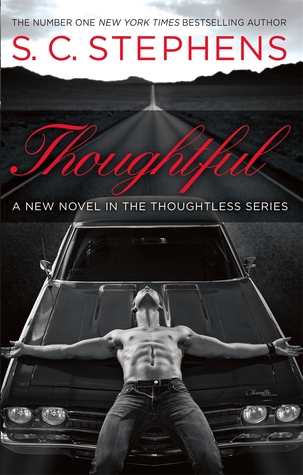 Summary: In Thoughtless, Kiera told her story. Now it's time for Kellan Kyle to share his side in Thoughtful . . .
The only place Kellan has ever felt at home is on stage. Gripping his guitar in a darkened bar, he can forget his painful past. These days his life revolves around his music and his band mates, and that's the way he likes it. And then one woman changes everything . . .Kiera is the kind of girl Kellan has no business wanting - she's smart, sweet, and dating his best friend. Certain he could never be worthy of her love, he hides his growing attraction . . . until Kiera's own tormented heart hints that his feelings might not be one-sided. Now, no matter the consequences, Kellan is sure of one thing: he won't let Kiera go without a fight.

Review: Words cannot even begin to describe how much I love Kellan Kyle and the Thoughtless series. I devoured all three books when they came out about two years ago and haven't been able to forget about Keria and Kellan's story ever since. When I heard that Thoughtful was coming out and it was Kellan's point of view, I knew that I had to read it!
After always never feeling good enough as a child, Kellan has found a home onstage where he can shine with his guitar and best friends. It also gives Kellan the opportunity to feel that connection with his fans, on and off the stage, and never feel alone. From the moment Kiera walks into the bar, though, Kellan is completely struck by how sweet and beautiful of a person she is. The only problem? She's completely in love with his best friend. Kellan does his best to resist Kiera and be happy for his friend, but when things start to heat up between them and Kellan realizes Kiera may just feel the same way about him, Kellan won't back down without a fight. I thought I loved Kellan when I read the Thoughtless series, but holy cow do I love Kellan now. Being inside of his head was so heart-wrenchingly beautiful and I felt so many emotions throughout the entire novel. His relationship with Kiera is so back and forth and I was surprised how much I started to really hate Kiera. It's been awhile since I've read Thoughtless, so I don't remember all of the details of her story, but I just started to hate her for putting Kellan through so much pain! She seemed so selfish in this book because we didn't get to see all that was happening between her and Denny. What we got was Kellan's desire to feel wanted and worthy of someone and have Kiera constantly taking that away from him. Ugh! Kellan is so deserving of love in this book that it just broke my heart!Having Kellan's point of view means that we got to see the guys act like, well, guys around him. It was fun seeing the band together and how they act around each other. My only problem with this book, though, was that Kellan's emotions became a bit redundant and I felt like we were in his head a little too much. Yes, I get he loves Kiera and has a hard time wanting her while wanting her to still be with Denny, but we didn't need so many inside moments and I could have used more action in the plot rather than inner monologue within Kellan's mind. Other than that redundancy, though, I felt even more connected to Kellan in this book and just wanted to shake Kiera for putting him through so much pain! Can't she see what an amazing guy is right in front of her?!?! Granted, Kellan did have his part in the hardships of their relationship, but he had to put up with so much when all he wanted was to feel loved! Before even thinking of starting this book, you have to read Thoughtless. Once you see Kiera's point of view, you'll be able to handle her character's flaws in this book and truly appreciate the emotions and hardships they face in this book. And be prepared to fall completely heed-over-heels in love with the super sweet, yet completely unnerving singer named Kellan Kyle. That's a name you'll never, ever forget after reading this series!

Posted by Jessica (Peace Love Books) at 6:18 AM